British 3D designer Louise Driggers, better known to the 3D printing community as Loubie, has released a new design. The Sorceress has been brought to life by Loubie, “so anyone can achieve a decent result even if they don’t have access to a top end printer” and is entirely 3D printable without supports.

Fans of the design, which is available on Cults and Pinshape, have already started experimenting with materials used to make The Sorceress, with some inadvertently turning the pen holder into a flexible catapult for launching small projectiles.

Fly me to the moon ? pic.twitter.com/5ja63QO0iT

In a survey conducted by researchers at Gartner, (NYSE:IT) 388 senior executives rated the productivity impact of emerging technologies as “very low” on their projected list of breakthroughs for the next 5 years.

General-purpose technologies (GPTs) referred to in the survey are specified by Gartner as the Internet of Things (IoT), Aritificial Intelligence (AI), blockchain and 3D printing. In order to keep a competitive edge in the future, analysts recommend a shift of focus to such technologies in place of more outdated systems.

The Office of Naval Research (ONR) has granted the University of Pittsburgh’s Swanson School of Engineering $449,000 for specialist research into the use of steel for 3D printing. Assistant professor Dr. Wei Xiong will lead the project, alongside PhD students Esta Abelev and Susheng Tan who will conduct characterization and corrosion tests for the metals.

According to Dr. Xiong,

Steel and its alloys are still the best, most versatile and structurally sound metals for naval construction and repair, and so our research will focus on developing new toolkits to leverage the use of new steel prototypes in AM that will benefit the U.S. Navy.

The project will be undertaken at the ANSYS Additive Manufacturing Laboratory, also home to $500,000 Inconel research funded by NASA.

The Massachusetts Institute of Technology (MIT) is working on a wearable accessory to help visually impaired users travel independently. The device, composed of a haptic belt, braille interface, portable camera and computer, uses 3D depth detection to alert the wearer of their surroundings.

Similar technology is used in the operation of autonomous vehicles, where LiDAR scanning is used to help cars “sense” the road. Initial tests for the MIT study showed promising results, reducing a wearer’s contact with stationary objects by up to 86%.

A  3D printed movable type for Braille has also been entered into the 2017 Hackaday Prize.

Professor Alex Ellery and his research group at the Department of Mechanical and Aerospace Engineering, Carleton University, Ontario, are getting closer to the possibility of a self-replicating machine. Using the model of a RepRap 3D printer, the researchers have so far been able to replicate the majority of a motor that can be used to power the machine. The idea is to be able to extend this concept to create a 3D printer capable of self-replicating using material excavated from the moon.

In a interview with Space.com, Professor Ellery shares his belief that “self-replicating machines will be transformative for space exploration because it effectively bypasses launch costs”. Supporting research for the project has been published in the Journal of Spacecraft and Rockets, Volume 53, Issue 2.

LSAM Print3D software gets an update

Thermwood has released an update to the Print3D software for its Large Scale Additive Manufacturing (LSAM) machines. The new feature allows multiple CAD models designed in the software to be 3D printed at the same time.

For two years Calvin Blyde has worked on a project to make a 3D scanning platform that can capture some of the most valuable days of a parent’s life in 3D. A 3D printed frame, composed of 59 cameras works using the process of photogrammetry.

The arrangement allows multiple photos from all angles of a baby to be take in a single shot. With Blyde’s company setup for the project, the multiple photos gathered from this action can then be stitched together, creating a 3D model to be shared with friends and family around the world. 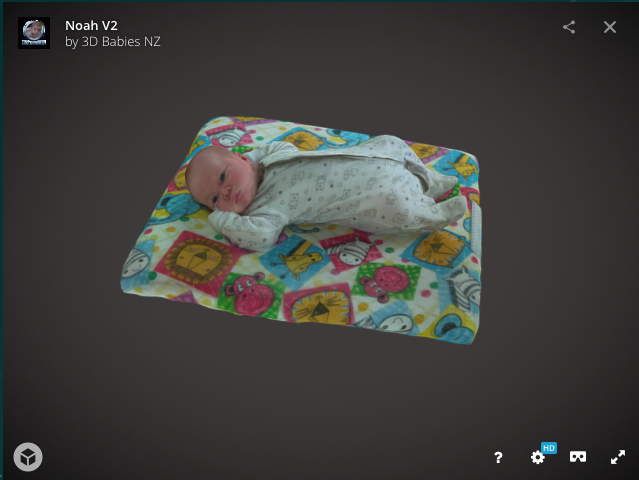 In a similar project, Estonia company Sirbonu OÜ are taking ultrasound images to the next level and 3D printing statues of babies as they appear inside the womb.

The KOMET GROUP, a leading supplier of precision cutting tools, has also reviled it is working with Renishaw additive manufacturing machine in the production of custom parts.

Experimental fashion artist Jamela Law, has launched a 3D printed capsule collection of garments suitable for the catwalk. The honeycomb collection has been created with sponsorship from Takasago, Swarovski and Converse, and exhibits over 6 individual designs in dress wear and accessories.

The construction of a new headquarters for metal additive manufacturing company SLM Solutions is reportedly on schedule for launch in Q1 2018. The new site in Lübeck-Genin, Germany, will allow for a production capacity of around 500 machines, employing around the same number of employees throughout.

For all the latest 3D printing news subscribe to our free newsletter. If you want to join the conversation then follow the most popular social media accounts in the 3D printing industry

Featured image: Sliced logo over a 3D print of The Sorceress by designer Louise Driggers. Original photo via Loubie on Cults.