The Perfactory Micro Advantage is being billed as an entry level 3D printer for jewellery designers. With a maximum build size perfect for most jewellery pieces and a new wax-like casting material it’s aimed directly at the jewellery design and manufacturing industry. 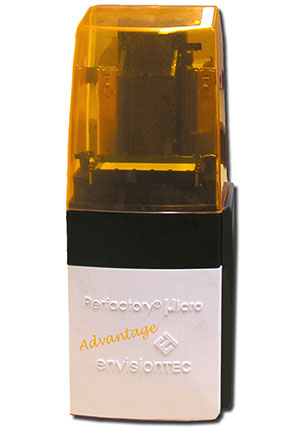 Bigger may be the goal that a lot of 3D printer manufacturers are working towards lately, but for the needs of a jewellery designer too much bigger would certainly not necessarily be better. The new Micro Advantage is EnvisionTEC’s way of doing bigger while still being useful to the needs of small-scale object designers.

The build envelope will allow designers to print larger pieces of jewellery like bracelets without wasting space or resources with a build platform larger than a typical jewellery designer would need. The build envelope is only 2.36 inches x 1.77 inches x 3.93 inches and the machine itself only has a footprint of 11 inches x 10 inches x 24 inches so it won’t take up a lot of space. The resolution will differ based on the material being used, but it should maintain an XY resolution of 50 microns with an adjustable Z resolution of 25 to 100 microns. With a build speed of 0.394 inches per hour on full capacity prints, the machine isn’t the fastest on the market, but it’s still pretty fast. And of course, as is becoming standard, the printer is automated and completely self-calibrating.

In addition to its new printer EnvisionTEC has also announced two new casting materials called EPIC and EPIC M. The new wax-based printing material EPIC is specially formulated for use with their Micro and Mini lines of 3D printers and EPIC M is specifically for use with the Micro printers. EnvisionTEC promises that the material will maintain the quality and detail of their plastic casting materials but with the properties and adaptability of its wax products.

As the son of a jeweller, the ease with which jewellery can be created and cast now is rather staggering in comparison with the more traditional methods used by my mother. Over the years my mother has brought dozens of odd machines that helped her create jewellery into our house, and it isn’t hard for me to imagine her wanting a machine like this. Of course I’ve mentioned 3D printing to her as a way to build jewellery before, but she stills asks what kind of ink 3D printers use.

Head on over to EnvisionTEC and check out their line of Micro printers and printing materials and take a look at this video where they show off their first Micro printer the Micro Hi-Res: