New York is known for its delicious cuisine. While we were there for the Inside 3D Printing event, Danielle and I had the opportunity to eat flavourful Indian, rich Italian and British food that wasn’t even bland.  What we missed out on, unfortunately, was the authentic, 3D printed food of the future. Instead, we had the next best thing: AJ Jacobs describing his experience with 3D-printed food from Hod Lipson’s lab at Cornell University.

Jacobs is a writer who’s become famous for fully immersing himself in the stories he’s writing – not in the way that Hunter Thompson joined the Hells Angels, but more in the way that Morgan Spurlock ate only McDonald’s for a month.  For instance, in writing The Year of Living Biblically: One Man’s Humble Quest to Follow the Bible as Literally as Possible, Jacobs based his life around the moral codes of The Bible for an entire year, blowing a shofar on the first of every month and refraining from shaving the corners of his beard. In writing about outsourcing, he hired assistants in Bangalore, India to perform anything he needed to do – answer emails, read his children bedtime stories, argue with his wife. So, when it came to writing about 3D printing for The New York Times, the writer hoped to live for a month relying only on additive manufacturing. This meant 3D printed clothes, home goods, transportation, everything.  Unfortunately, Hod Lipson, who advised Jacobs on the project, estimated the cost of living off of only 3D printed products for an entire month would tally up to about $50,000.

For that reason, the writer opted for a single, Italy-themed, 3D printed meal.  So, Jacobs went about planning a romantic dinner for he and his wife in which every utensil, plate, piece of décor, and morsel of food would be additively manufactured.  He began his journey into the world of 3D printing by purchasing himself a Cube, from 3D Systems. With the simple plug-n-play machine, Jacobs began learning the ropes of desktop fabrication, climbing the learning curve faced by many a first time 3D printer user.

After overcoming typical obstacles, such as clogged nozzles, he was able to manufacture his own home goods. Jacobs 3D printed things like forks, spoons and cups that he might be able to use for his romantic dinner.  He even scanned his son’s head and 3D printed a one-time use saltshaker, in which he paused the object mid-print and filled it with salt. In addition to the actual flatware and dishes, Hod provided Jacobs with a fully 3D printed speaker (wires and all) with which to play Sinatra and a 3D printed necktie, in lieu of a completely 3D printed tuxedo. 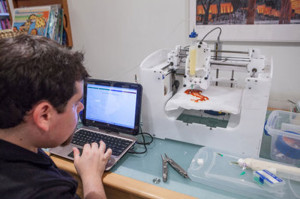 In the end, many of the objects used to serve and eat his 3D-printed meal were designed by researchers at Hod Lipson’s lab and printed by Shapeways. The silverware and dishes were actually quite remarkable. Hod’s students crafted models that improved upon our standard utensils.  The fork, for example, was made in such a way as to prevent the business end from touching the table and, thus, picking up germs. The soup bowl shifted its balance so that, as you ate, the liquid would tilt towards the shallower end to make it easier to spoon out and finish. 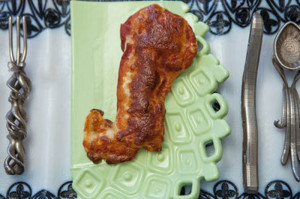 Finally, the writer was treated to his first 3D printed meal.  Cornell, if you’re familiar with the background of 3D printed food, was one of the first universities to research the concept, starting in 2007.  One of Hod’s researchers, Jeffrey Lipton, brought his [email protected], one of the two original open source 3D printers, over to Jacobs’ home to start manufacturing a romantic dinner for two.

Each course was meant to reflect the benefits of 3D printing food. A pizza was printed in the shape and with the topography of Italy, to demonstrate the machine’s ability to create complex shapes.  Jacobs mixed a concoction of eggplant and squash to show off the way 3D printing food can combine multiple ingredients in a single job. The result, of course, was completely inedible. 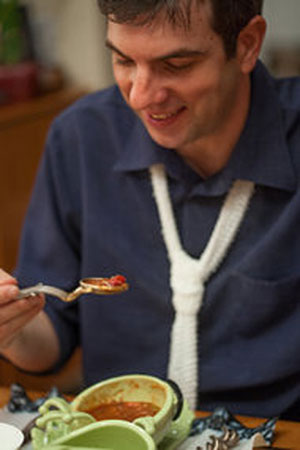 Lipton also printed Jacobs and his wife some minestrone pasta, as well as panna cotta in the shape of the couple’s initials.  In order to prepare the dishes for the extrusion process, the writer explained that xanthan gum was introduced to each food material that was printed.  This gave every part of the meal a chewy texture, but one that made Jacobs’ wife remark that it “[tasted] like the future”.

The entire process took an entire day and each printed dish had to be cooked traditionally, once off of the printbed.  Plus, the whole thing cost more to pull off ($50 for a single Shapeways fork) than the journalist was paid to write the story.  Still, Jacobs saw the technology’s potential for the future.  3D printed food is in its nascent stages with only a few 3D food printers on the market or coming to the market soon. The Foodini from Natural Machines, who also lectured at Inside 3D Printing NYC, has only just launched on Kickstarter, but holds some promise.  The ChefJet from 3D Systems seems to create complex sweets that are delicious and beautiful.  In the next five years, I wouldn’t be surprised if we didn’t see the 3D printing revolution spin off into a small food printing revolution, too.