Who thought a Rat, some Gold and Silicone could turn into a tiny stingray?

As odd as it sounds, a team of scientists have recently conducted a research project, where they used 3D printing and genetic engineering to create a biohybrid animal.

This tiny swimmer moves by using the mesh rat heart muscle cells inside its silicone body to pulse, allowing the tiny flipper areas of its body to swim through water. It has a skeleton made from 3D printed gold, which allows it to store energy for movement. 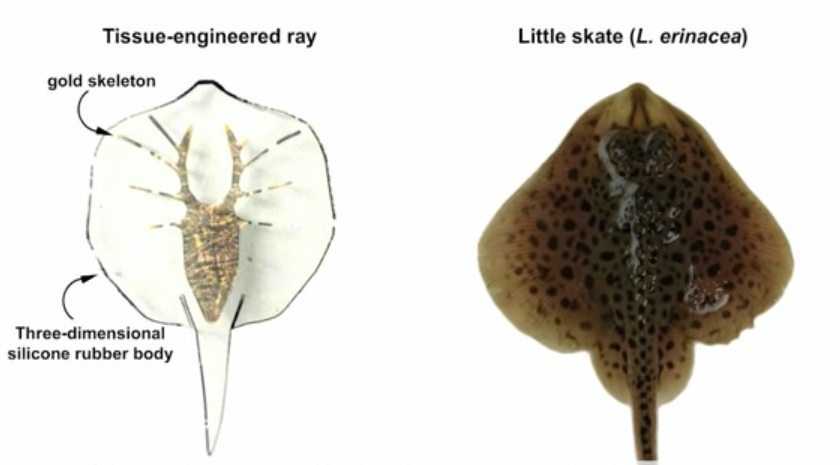 The key to the silicone stingray was the use of rat heart cells, as they allowed it to be so small whilst being able to move on its own. If motors had been used, it would have been a whole lot larger. As well as allowing it to move, the muscles also work as control system for the tiny stingray. Through genetic engineering, the cells were engineered to be sensitive to light, allowing scientists to control it using flashing lights: the speed of the flashing light controls the speed at which the creature moves, whilst shining a light on one side causes it to change direction.

The cells were also shaped so that the mesh of cells would work with the shape of the stingray’s body.

The project was lead by Harvard’s Disease Biophysics Group, which was led by Kevin Kit Parker, with a team of scientists from the University of Illinois, University of Michigan and Stanford Medical Center.

Such development is incredibly exciting to see, though it’s also slightly worrying, as plenty of Hollywood movies have made it clear that artificial creatures much like this stingray are never a good idea.

As much as I’d be kind of tempted yet terrified to have one as a pet, this project was certainly a research exercise. Artifical animals could certainly be useful for a wide range of applications such as for treatments and surgery, though there are also several wider applications. The knowledge gained is hoped to help research development for the creation of artificial hearts. This tiny artificial animal could also be a step forward in the world of artificial cognition too.