It's Not the Size of Your 3D Printed Destiny Gun Replica…Who Are We Kidding, Bigger is Always Better

At least bigger is better when 3D printed replica guns are involved. Case in point this massive four and a half foot Thunderlord exotic machine gun from the hit Bungie videogame Destiny. The prop gun took over a week to print and used over five and a half pounds of filament.

When a fan 3D printed a Fusion Rifle from Destiny, it was only a matter of time before someone came along and one-upped him. Enter our good friend Kirby Downey, who we last saw tackle Star Lords iconic Element guns from Guardians of the Galaxy. Downey didn’t just one up the original Destiny gun, he nuked it from orbit. 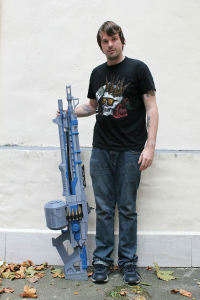 The Thunderlord measures out to be about 4.42 feet long and weighs 5.51 pounds. There were a few parts made from NinjaFlex and carbon fiber that were printed on a MakerBot, however most of the parts of the gun were printed on an Ultimaker 2. It required two and a half spools of PLA and over eight days of continuous 3D printing with 0.2mm resolution. Downey said that the complete gun cost about $180 in material. It could have cost even more had he not made parts of the gun hollow, leaving a 3mm thick wall with 10% infill. 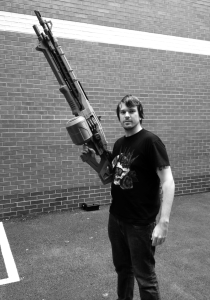 Downey designed the model in Solidworks in about a day using promotional material from Destiny’s E3 demonstration. The Thunderlord needed to be broken up into 45 parts and then assembled using epoxy glue. He did not sand or use filler on the model, the only cosmetic touches that he added to the prop was a few blue spray-painted parts.

Even cooler is the fact that the replica has functional parts, including a removable cartridge, a spring-loaded trigger with full reload action and the chamber can open up, allowing the bullet belt to be loaded into it.

If you have the time, 3D printer and budget, you can have your own Thunderlord because as with everything he designs, Downey has uploaded it to My Mini Factory as a free download. You can find more pictures of the Thunderlord here, and you can read more about how the gun was created on Downey’s Reddit post. And before anyone thinks that Destiny’s production studio is going to be upset by his model, there has already been a Bungie seal of approval delivered via Tweet, which I’m almost sure is practically a legal contract.