360Heros: Record Anything and Everything

Since the beginning of time, humanity has desired the following three abilities: the power of flight, precognition, and, of course, the ability to see from all 360 degrees at once. The first was accomplished with the invention of the airplane. The second is only possessed by the illuminati, the Mayans, and Aquariuses. And, now, the last, and most coveted, is waiting to be unlocked by 360Heros, a project seeking funding on Kickstarter. 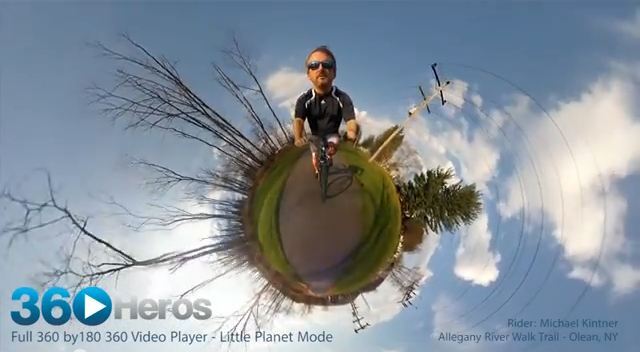 The project is pretty neat and straightforward. Michael Kintner, long time extreme photo aficionado, has developed a camera mount that makes it easy to photograph or record from 360 degrees around and 180 degrees up and down at once, creating full spherical coverage of a scene. And the reason that we’re covering it is not because it somehow allows you to scan and/or print objects in 3D, but because the mount is 3D-printed from aircraft-grade nylon. With the 360Heros mount, you slide in 6 or 7 GoPro digital cameras (depending on which 360Heros mount you’ve got) that are oriented in such a way that each camera views a portion of a 360 degree sphere. Because of the material from which the mount is made, it appears to be easy to slide the cameras into the fixture and start snapping footage.  Kintner has also worked with developers to create some interactive software that’s perfect for viewing these immersive photos. It’s not so fun on a PC or laptop, but it’s really great when you’re using the accelerometer in an iPhone.

Ok, so it’s basically six cameras mounted together, right? You’re probably wondering how they sync to capture footage at the same time. Well, there’s no mechanism built into the 360Heros mount at the moment. Kintner uses a remote for the cameras that will trigger them at the same time and is also promoting special splicing software as a part of the rewards that should be able to connect the footage from the different cameras together. Another question that might come to mind is whether or not the mount only works with GoPro cameras.  The answer, I believe, is yes. This apparatus is suited to folks who may already be using GoPros and are used to their format. If you’re unfamiliar with GoPro cameras, you may not be extreme enough. Without a viewfinder or a zoom, these high-resolution, compact cameras are most often mounted to a user’s head to capture off-roading, scuba diving, surfing, and anything else a nebbish person like me is likely to avoid. But, Kintner has his mounts attached to a variety of cool devices, like a third person camera fixture and a mini-drone, so that the unextreme, like me, can use the camera mount to record boring things like walking to the store or spying on neighbors. 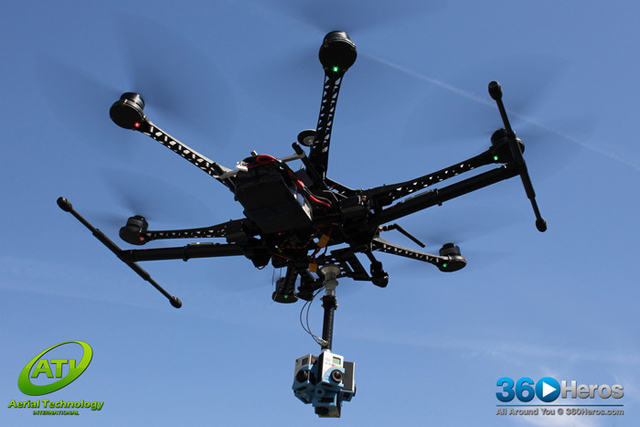 The GoPro cameras alone are about $399, so if you’re going to be a backer, you may have to get them yourself. Kintner is offering these mounts in various reward packages, but it looks like the cameras are only given to large donors. The packages can best be explained with this diagram: 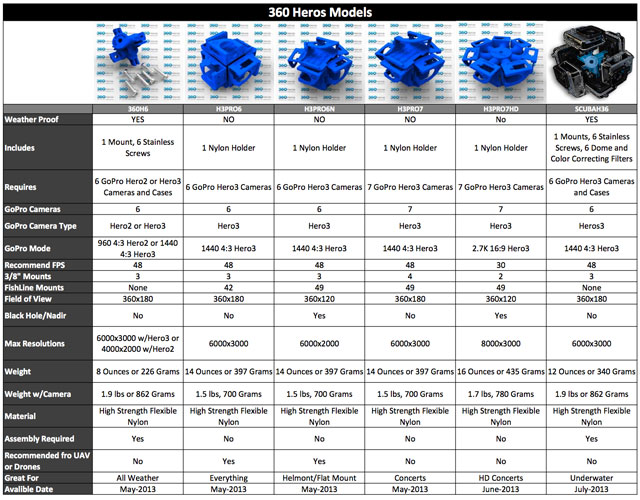 The project at the time of this writing is at $7,677 of its $75,000 goal, but it has experienced some success outside of Kickstarter, including its use in an immersive concert recording for Beck’s cover of Bowie’s “Sound and Vision”:

In addition to the use of the 360Heros mount itself is a strange 360Heros-type sound recorder as well.  If you watch the above video, you will see a human head-shaped object with 4 sets of ears that houses microphones to record sound from all angles as well.  Pretty neat looking for a creature of unimaginable horror!