Our novel little technology has become part of a logically growing trend of 3D printed award statues.  Previously seen at Holon Fashion Week, the InvestMaryland Challenge in the US, and the 3D PrintShow Awards, the use of 3D printing to create commemorative statues is likely to increase as the technology grows in popularity.  Most recently, the world’s largest 3D printing retail store, iMakr, was commissioned to create all of the awards for the World Interior News Awards, held this past November. 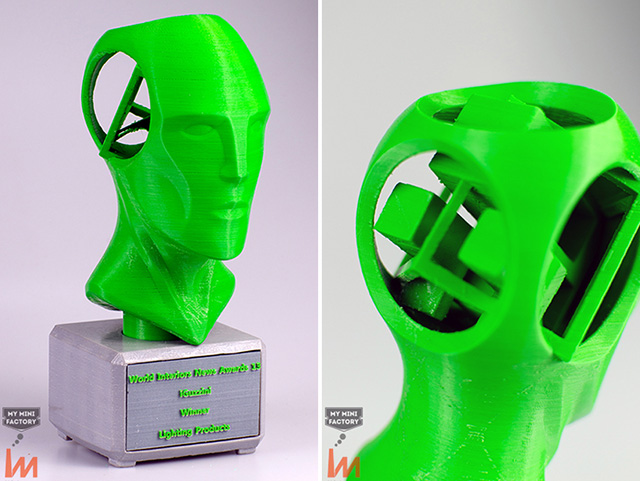 World Interior News, the World Architecture News spinoff devoted specifically to the insides of places, held its annual awards show paying tribute to designers and architects of residential, restaurant, retail, public sector, interior accessories, and many other interior spaces.  To do so, they enlisted the help of iMakr designer Daniel Schunemann, who created a vibrant green 3D-printed head.  Schunemann explained his inspiration for the design, saying, “Interior Design is a branch of architecture, so I was playing with ideas of structures and different ways of displaying this and representing organic thought.”

The ceremony was held at London’s Saatchi Gallery on November 28th, where the winners, determined by a jury led by Sir Terence Conran, received the glorious green heads from BBC presenter Andrew Graham-Dixon.  If you’re jealous that you weren’t one of the selected winners or simply want to reward your own interior design skill, you’re in luck! You can download the trophy yourself from iMakr’s MyMiniFactory.com.