In previous posts regarding turntable scanners, Juho has made a couple of interesting observations.  First, he pointed out that, as a number of options for desktop 3D scanning rush to market, there are a few specific characteristics with which to distinguish every option: “cost, speed, resolution, maximum scanning size and ease of use.” Additionally, Juho realized that no competitor has really come to the match offering a superior technology, instead proposing only slight variations in existing turntable scanning technology.  Most options, including the Makerbot Digitizer, Matterform, Dimbody, and the Rubicon, resemble one another pretty closely.  A new 3D scanner has been launched on Kickstarter and, though it does not appear on the surface to be all that different from its competitors, it does boast superior technology.

The Robocular 3D scanner is like other 3D scanners (outside of the handheld category like the Sense and the Fuel3D) in that it uses a turntable, lasers, and an HD camera to capture a small object.  You put an object inside the Robocular scanner, close the door, and hit scan.  Already, the Robocular begins to differentiate itself from the previously mentioned machines by enclosing the scanning area.  This prevents outside light from inhibiting its own white light from registering color data. 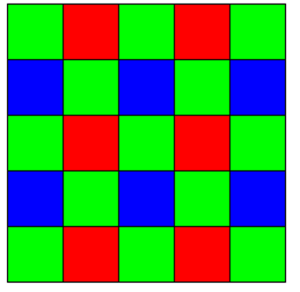 The Robocular also relies on green laser light, attached to a servo motor, to scan the object for depth information.  The servo motor allows the laser to scan back and forth, up and down to scan an object, as opposed to fixed lasers seen in other models.  As pointed out on the Kickstarter, and a forum where the company is taking questions, “CMOS color webcams,” the camera used in their scanning, “have twice as many green pixel receptors as red, allowing us to capture a much higher number of clear points.”  These two details, combined with a “high-precision turntable which rotates at about 4,000 steps per revolution” gives the Robocular the ability to capture 2-3 million points on an object with resolution of up to 150 microns (about .15 mm).  This resolution is finer than most 3D printers are capable of printing. 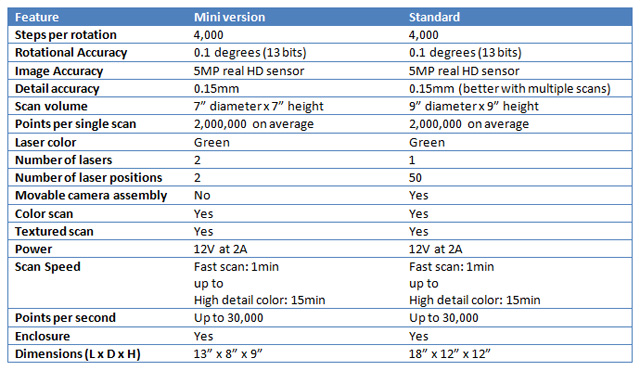 After creating 10 functional prototypes, the team behind this latest desktop scanner is offering two versions: the Standard, which can scan a volume of 9 in3, and the Mini, 7 in3, but only uses two fixed lasers, instead of one moving laser.  According to the Kickstarter, the Mini “won’t handle complex objects or objects with holes very well. So the model quality is not as good as the standard. The standard has movable parts that allow it to look beyond occlusions and holes and capture far more accurate models of complex objects.” 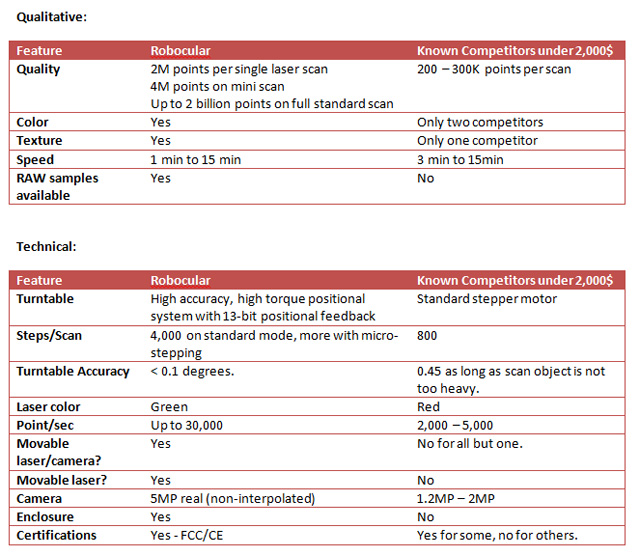 So, let’s see where it falls in Juho’s categories of cost, speed, resolution, maximum scanning size and ease of use.  The Standard is being offered at $799, a bit more than the Matterform ($579), much more than the Rubicon (with which you have to buy a camera separately, reducing the price to $199), and is much less than the Digitizer ($1400). The Mini will be sold at around $599. The device can also make quick and dirty scans or slower, more deliberate scans, giving it a speed of 1 to 15 minutes, depending on your choice of setting.  The scan volume is a bit smaller than that of the Dimbody, which was relatively unsuccessful on Indiegogo, but comparable to the others.

If the company’s claims are correct, the resolution of the scans might make the Robocular worth the price difference compared to its competitors. Now, all they have to do, is make their $180,000 Kickstarter goal (currently $34,094 at the time of this writing) and build the damn things.  I think that, based on the above scans, I’m sort of rooting for them, but, what their Kickstarter video and tell us what you think: