In a hole in the ground there lived a hobbit. Not a nasty, dirty, wet hole, filled with the ends of worms and an oozy smell, nor yet a dry, bare, sandy hole with nothing in it to sit down on or to eat: it was a hobbit-hole, and that means… 3D printing?

Creating the most saturating mythology of any individual since Homer probably took a bit of self-reflection on this point. J.R.R. Tolkien created his fictional world as a moral roadmap for his primary audience, his own children.

Whenever characters fall enamoured for the material that of their own labour, bad things happen. Feanor was first falling for the jewels of light made by his own hand. The main protagonist  is jealous of this work, commits terrible deeds to obtain the jewels, which have captured the primeval light of sorts and great wars are fought to get them back.

The ring, the trinket most famed from Tolkien’s vast world of items of many cultures, most explicitly explored, is created as an act of temptation to bind the pride of produce of self: technology, however fantastical, snaring those who crafted it in a subtle self-adoration. Bound to the love of their creations their creations are bound to the One Ring, there to deceive the prideful and powerful to receive the tyranny of evil.

So far so Tolkien. A search of recent articles here at 3D Printing Industry will point to an emerging trend of start-ups and existing business, right up to the largest corporations, currently exploring ways of creating additional value via 3D printing related offers. Personalised gamification, personalised rewards, personalised merchandising are cropping up more and more.

If there were ever a movie franchise which has aimed to provide value in volume of content it is Peter Jackson’s Tolkien films. The DVD’s were packed full of innovative content: double the amount of movie content in behind the scenes documentaries of genuine quality; booklets; models of characters, passcodes to online content—finding additional value to add to advertising traction is no simple feat.

The movies themselves pushed new territory in new technology. The Weta workshop prosthetics earned many media mentions for innovative use of 3D printing. As well as many other mentionables such as computer graphic engines capable of handling thousands of generated artificial characters.

Putting the availability of items in this particular legendarium together with an innovative reputation of the creators of the movie franchise to maintain and the current trend for attention for 2013’s most media friendly technology (3D printing) and it’s not a long stretch of the imagination to see how we get to Microsoft’s production of a blueprint for a 3D printable artefact for the new The Hobbit: The Desolation of Smaug’s movie. 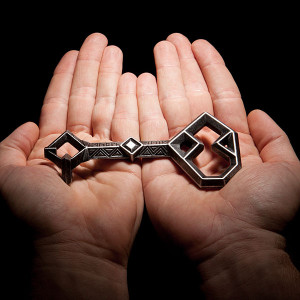 “… the power of storytelling is something we strongly believe in at Microsoft Advertising – our creative for the new film in The Hobbit Trilogy is evidence for how it can bring an ad campaign to life.”

“By working closely with Warner Bros. UK and its UK agencies, PHD and Think Jam, we’ve been able to co-create a digital advertising solution that is truly at the forefront of global innovation. By offering fans a blueprint for a 3D model of one of The Hobbit: The Desolation of Smaug’s ‘key’ artefacts, we’re providing a genuinely valuable and unique experience that puts the consumer first, while continuing to deliver for the client and push the boundaries of what is creatively possible using new technology.”

Giving away a design rather than the actual object could be seen as a bit of a step back in the provision of value. But, on the other hand, to buy the key as a model would cost around USD$30. Riding the wave of the 3D printing trend is no sin. Here, the novelty may be the attraction, but perhaps it’s just not a deal worth negative critique.

Furthermore this is a mere toe in the water for the potential of merchandising as a whole. I’m not a merchandising expert. However, if you can give away the design of a thing rather than the thing itself, I’ll leave with your opinion of whether we think it takes an expert to say whether this will catch on.

The insight is in the number of people who can actually produce this freebie at all at the moment, given the distortion of media attention on 3D printing currently, it’s easy to forget less than 70,000 people own 3D printers. And, until many or most may own one, 3D printed freebies are even more of a money saver for advertisers, given that most people won’t be downloading their design of a free thing rather than the design itself. And, speculatively, it’s not hard to see how that will continue to catch on either…