In a move indicative of 3D printing’s potential impact for the automotive industry, the Volkswagen Group and its Department of Development and Technological Planning has announced a pilot project to produce the first saleable 3D printed spare parts for its cars.

In addition, VW and its manufacturing subsidiary Sitech unveiled a new car model made with the help of the technology, which is the first GTI to feature electric propulsion.

The future of 3D printing for cars

In a bid to reduce product lead times and improve the capabilities of parts manufacturing, mobility industries have been quick to adopt additive manufacturing technologies into the production life cycle. 3D printing has been used to create, renovate, and reverse engineer parts for cars, and also to create quick and accurate prototypes of new models. In an extension of this, companies have noted the potential for an entirely digital inventory – as commented by VW,

3D printing in the Volkswagen Group has been used so far only in the areas of prototype and equipment construction. Now we want to apply this internal know-how to the production of spare parts.

Elsewhere, multi billion dollar rail company Deutsche Bahn has been looking at the feasibility of a digital warehouse concept for spare parts in its trains. In collaboration with additive manufacturing company EOS and software providers 3YOURMIND, Deutsche Bahn is also working on the Mobility Goes Additive project, to encourage adoption of the technology across the industry.

VW are now joining this trend in the creation of a small component found within a car door.

Consumer grade 3D printed parts from VW are starting small in the design of a corrado adapter. Installed to the prevent the door handle from damaging leather interior, corrado’s are simply a kind of ‘spacer’. As a now discontinued object, the goal of the pilot project was to be able to recreate the part using 3D scan data. With this a 3D model was created, then 3D printed in metal. 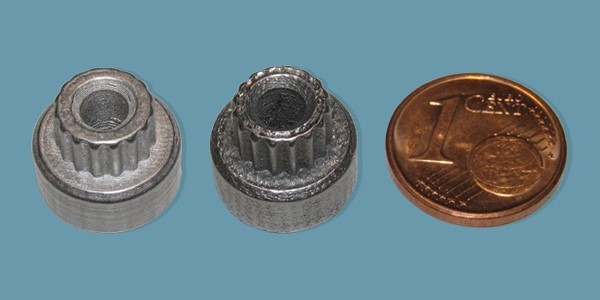 In a comment on Americancarbrands.com, Tobias Pape, purchasing manager for classic VW parts, explains some of the redesigning challenges,

Progress for the parts continues, but 3D printing is seeing further introduction into VW’s other design projects.

Unveiled at the Wörthersee car show in Austria, the Golf GTI First Decade model integrates the use of digital technologies. According to a press release from VW, “Designs were created on graphic tablets; special components were designed on CAD computers and produced using advanced 3-D printing technology.”

The car was created by a team of 13 apprentices over a period of just under nine months. Design highlights include an electric motor for rear axle and all-wheel drive, three-color scheme with matt foils, and 1,960-Watt sound system in the back.

Discussing the future impact of the project Peter Christ, Head of Automotive Technology Training at VW/Sitech in Wolfsburg, says,

During the creation of their dream GTI, our apprentices learn about the complexity and future challenges of automobile production. They gain further experience in the use of digital technologies, the application of system technology and electro-mobility. This is why we choose our strongest talents and offer them the opportunity to learn from experienced instructors and experts from the entire company at an early stage.

The regular introduction of 3D printing throughout VW’s projects is further validation of the technology’s validity within manufacturing. To stay up to date with the latest developments in this area and more sign up to the 3D Printing Industry newsletter, like us on Facebook and follow us on Twitter.

Featured image: The VW Golf GTI First Decade model and apprentices who worked together to make it. Photo via Volkswagen