Earlier this month I attended a conference at London’s Victoria and Albert museum to celebrate the reopening of the Cast Courts. Over 3 days academics, museum directors and curators presented papers on the theme “Celebrating Reproductions: Past, Present and Future”. Jonathan Beck, founder of Cultural heritage project Scan the World, was invited to address an international audience at the world’s leading museum of art and design as part of the 3-day program.

Initially conceived as a way for Victorian Britons to study European art history, the Victoria and Albert (V&A) Cast Courts brought together replicas of the height of Eurocentric classical sculpture and architecture.

First opened in 1873, the Cast Courts have undergone an extensive seven year renovation project. Restoring works such as the 35.6 meter high Trajan’s Column to former glory, and adding examples of modern techniques of reproduction.

The making of casts fell into the distinctly Victorian objective of the ‘improvement of public taste in Design‘ and the also ‘application of fine art to objects of utility’. This later objective is also arguably behind another application of a Scan the World object – a low poly version of the Laocoön Group used as inspiration for the inaugural 3D Printing Industry Awards trophy.

While the sizable propropiation of the conference program was dedicated to classic methods of reproduction, such as plaster casts, digital techniques were a key theme for Friday afternoon’s session.

Beginning with a talk by Goldsmith lecturer Dr. Oonagh Murphy on Hacking the museum: Appropriation, Reproduction and Digital Culture. Dr. Murphy argued that a three hat model (white, gray and black) is a useful way to understand how visitors to museums and art galleries interact with culture in the age of the selfie.

Jonathan Beck, founder of online cultural heritage project Scan the World, continued the digital theme – introducing his work as “The Digital Cast Courts”. Beck said that in Dr. Murphy’s terms he would categorized as a gray hat hacker, in that there is an intent behind his work. Initially entering museums uninvited, Beck would take thousands of photos and later digitally stitch them together – using photogrammetry. While the principles leading to the technique can be found in Da Vinci’s work, photogrammetry itself is closer to 180 years old.

Now Scan the World has grown to include over 14,000 sculptures and artefacts, techniques such as Structured Light 3D scanning are also used to capture data a higher resolution. To mark the reopening of the Cast Courts, two 3D printed sculptures were commissioned by the V&A which are copies from the permanent collection collected by Scan the World’s community. One, a Head of a Young Woman (a copy of Andrea Dell’Aquila) as well as a facsimile of Augustin Pajou’s Head of a Bearded Old Man.

Beck explained that museums were initially wary of his project and also confused by groups taking vast amounts of photos of their exhibitions – with one unnamed institution banning him temporarily. Fortunately more progressive museums have been more receptive to Scan the World, with Beck welcomed into both private and public collections.

In particular, the V&A was an early champion of Scan the World and were one of the first to recognise the importance of the project. In 2016, the V&A invited Scan the World to take part in the exhibition ‘A World of Fragile Parts’, in conjunction with La Biennale di Venezia.

Curator Brendan Cormier said of the exhibition that it would not only, “explore the threats facing the preservation of global heritage sites”, but also examine difficult questions such as, “What is the relationship between the copy and the original in a society that privileges authenticity? And how can such an effort be properly coordinated at a truly global and inclusive scale?”

This acquisition of the Scan the World objects is believed to be the one of the first times a national gallery has decided to permanently exhibit 3D prints of this type. The project represented a particular challenge that required consideration to be given to the intended permanence of the new additions. To tackle this issue Scan the World engaged the services of 3DCompare, a London based 3D printing service with a database of over 11,000 3D printable materials. 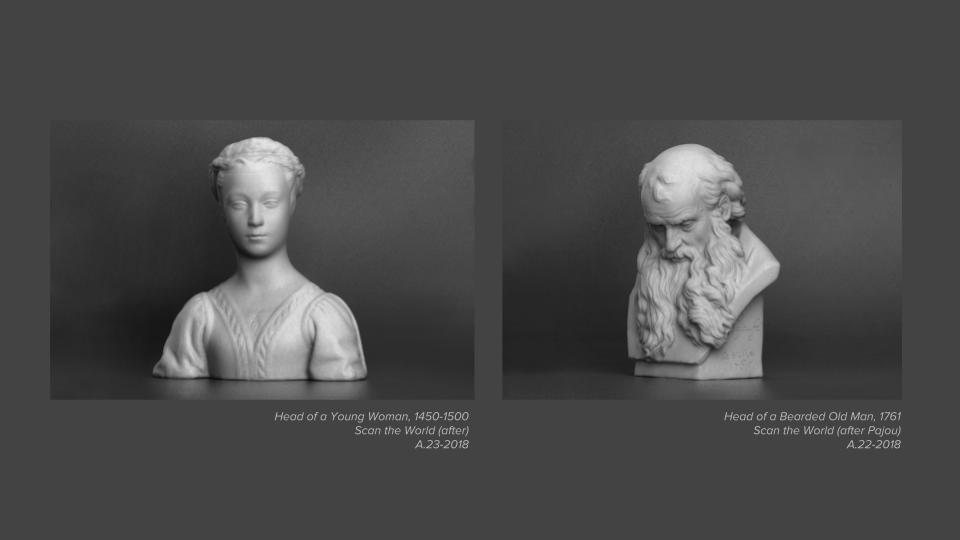 Data must be open

Beck said, “Scan the World’s intention is to subvert the museum’s approach to sharing copies of artworks, using a democratised technology to produce an open archive of objects of cultural significance.”

“Through collecting this data, the project serves as a public effort to bring art to the masses in a way more tangible than ever before”

For Scan the World it is crucial that the data collected is also open, accessible and optimised for 3D printing

As previously reported, the cultural heritage project is the largest collection of 3D scanned objects of its kind. The global Scan the World community uses data collection methods including photogrammetry and 3D scanning. The resulting library of 3D printable objects is made freely available to users, ranging from the young patients at London’s Great Ormond Street Hospital to revellers at the New Orlean’s Mardi Gras.

Now with the addition of two Scan the World 3D prints to its permanent collection more visitors will be able to discover the project first hand.

Make your nominations in the 2019 3D Printing Industry Awards.