The 3D Printing Industry Awards are fast approaching and we’re pleased to announce the winner of the design competition to create our trophy.

After reviewing more than one hundred entries from 3D designers across the globe, we settled on a winner. And working with The Virtual Foundry, the first 3D Printing Industry trophies have already been 3D printed in bronze metal.

We particularly liked the design for several reasons. The foundation of the design uses the Laocoön Group, aka Laocoön and His Sons, and introduces low-poly elements to give the impression that the figure is making itself. 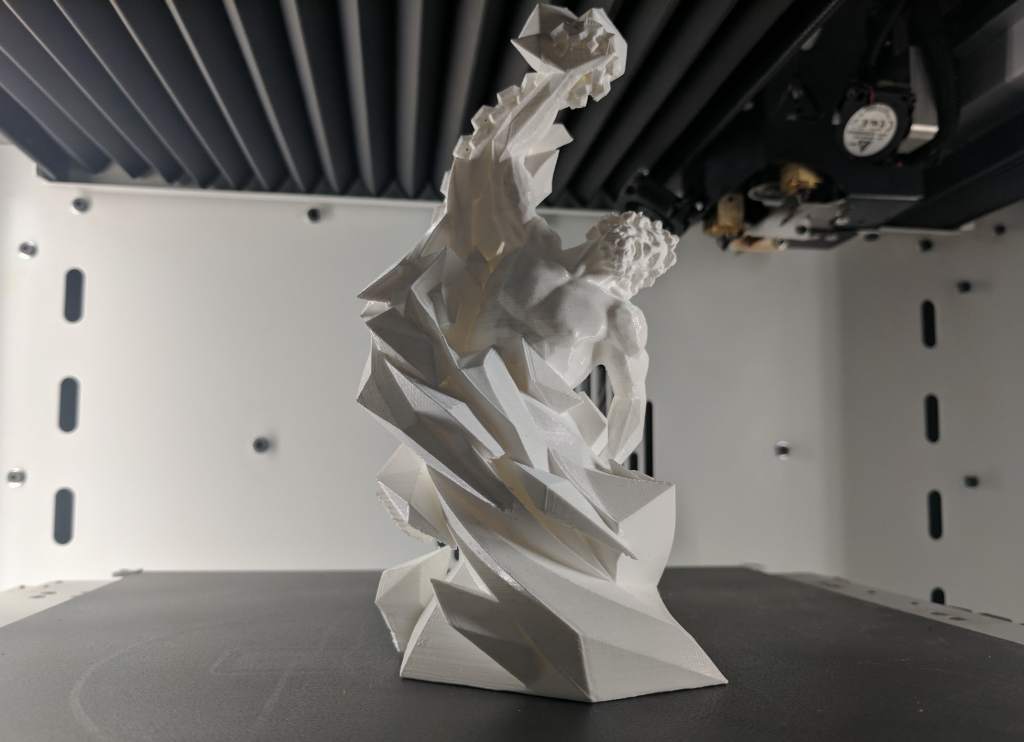 Remixing designs is of course a major aspect of the culture surrounding 3D printing and design, but the history of the original sculpture also proved remarkable. One theory even suggests that Michelangelo made the sculpture, possibly for the lulz.

Although over 2 meters in height, the original marble statue was lost for several centuries. When rediscovered by a 16th century farmer in a vineyard, Laocoön’s right arm was missing.

A heated debate ensued between the most prominent makers of the day. Michelangelo argued for an arm bent back over the shoulder, fending off the snakes. While Raphael pleaded the case for an extended arm. In 1510 and to settle the matter, the pope’s architect held a competition.

The 3D scan of the statue comes from the Scan the World collection. Jonathan Beck, from Scan the World, visited the Palace of Versailles to scan the 1696 reproduction of Laocoön and His Sons. Beck manages the world’s largest 3D printable museum, with over 6,500 statues, sculptures and busts from all 5 continents. All of these files are available for free download on MyMiniFactory.

When we announce the final votes on May 20th in London, each of the 20 winners will be presented with a metal 3D printed trophy, made using The Virtual Foundry’s flagship product, Filamet™, at our gala-dinner event.

Voting will close on May 15th, so make your vote now.

Or if you need some more information, read our profiles of some of the shortlists below:

3D Printing Start-up of the Year

Enterprise 3D Printer of the Year (other)

3D Printing Innovation of the Year

3D Scanner of the Year

3D Design and 3D Printing Software of the Year

Personal 3D Printer of the Year (other)

There are a very limited number of tickets available for the event, you can find more information here.

Let us know your thoughts about the design in the comments below, also we’re looking for a name for this figure.

You can subscribe to our free 3D Printing Industry newsletter here, and follow our active social media accounts here.