3D printed medical models are making impossibly complex surgical procedures possible (we just reported on two amazing ones this past week) but, just like in the manufacturing industry the application of 3D printing technologies is moving from prototyping to small series production, in the medical sector and more and more hospitals are using 3D printing to cut times and costs in an ever growing range of cases, even less sensational ones. 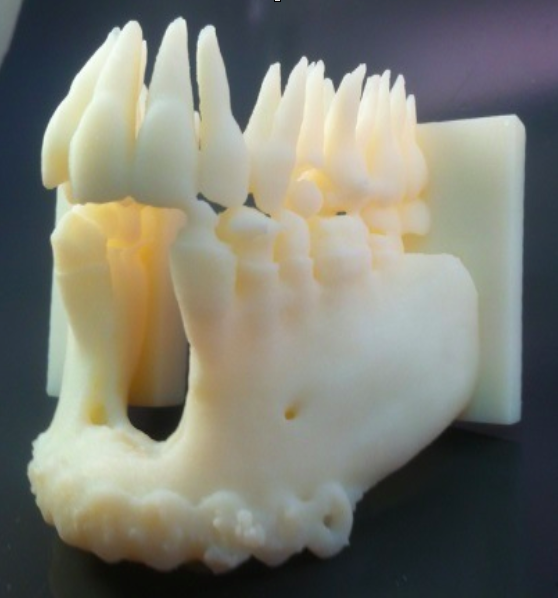 Replica3D, a company specializing in medical and commercial 3D printing, is reporting that 12 UK National Health Service (NHS) hospitals are using its Stratasys 3D printing technology to analyze the complexities of patient surgery prior to an operation. Most of all, since the British NHS is paid by people’s taxes, it is already having a significant impact on reducing costs and times. The patient also benefits by allowing for minimally invasive surgery, shorter anaesthetic times and earlier discharge.

“To us, 3D printing and the medical profession go hand-in-hand, particularly in the planning of complicated procedures,” said Matthew Sherry, Managing Director and Founder of Replica3D. “A 3D model equips surgeons with a hands-on perspective which cannot be achieved by looking at a computer screen. They can easily rotate, inspect and analyze each surgical procedure on a case-by-case basis, enabling them to pre-bend implants knowing that they will perfectly fit the patient. This is instrumental in eliminating potential problems during operations and can be used as a visual aid when explaining the surgical procedure to patients.”

Replica3D is based at Salisbury District Hospital and thus can work in close proximity to surgeons and maxillofacial labs. It uses Stratasys’ polyjet technology, specifically its Objet24 and Objet30 3D printers, to convert the patients’ CT scans into physical and personalized, highly detailed (up to 14 micron accuracy) medical models that are used as surgical guides to test implants for size and fit pre-surgery.

This includes re-bending of titanium implant plates to the patient’s exact specifications and preoperative investigations across maxillofacial, orthopedics, neurology, spinal and ears, nose and throat wards, to identify the correct procedure and improve outcome.

The company also produces a number of cranioplasty models in which the unaffected side of the patient’s face is mirrored to produce a 3D printed reconstruction, prior to the fitting and placement of a titanium plate.

In all cases Replica3D’s models are “carbon copies” of the refined DICOM data collected from CTI and MRI scans.

“Opting to purchase two Stratasys 3D Printers has also enabled us to double our capacity and, with more and more Trusts requiring our services, I believe that we will see a 50% increase in client demands within the next few months,” Sherry concluded.

Chris Baker, Stratasys Northern European Territory Manager, confirmed that the medical sector is proving to be one of the most promising for the company. “In an industry where precision is paramount – he said – the ability to produce highly accurate 3D printed surgical models and guides that mimic the look and feel of titanium implants can both lower costs and reduce the time required for patients to be anesthetised. As a result, an increasing number of hospitals worldwide are integrating 3D printing into surgical planning procedures, which is having an immediate positive impact on the quality of patient treatment.”

Medical applications of 3D printing are definitely booming and it looks like we are going to hear a lot more about it in the upcoming weeks. After that we probably will maybe not hear about so much, and that will mean that it has become the norm.