Paleontology is a subject that captures a lot of people’s imaginations, particularly when it comes to dinosaurs. Many a museum that has skeletons of the giant reptiles of the past can be found with crowds gathering around them all agog. We’ve now probably got used to the wonders that computer generated animation can do with these animals, with movies and television programs showing the almost fantastical world that they lived in. But other ways of representing these creatures via technology continue to evolve. One such method is via 3D scanning and 3D printing.  The Natural History Museum of Berlin is home to a large collection of dinosaurs on display including the world’s biggest mounted skeleton – a Brachiosaurus – at some 13.27 metres tall. The museum’s ‘The World Of Dinosaurs’ exhibition includes many extant structures of high quality specimens. 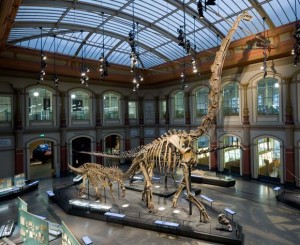 At the start of the twentieth century the Museum fur Naturkunde commissioned an expedition to Africa to retrieve dinosaur fossils that was to become the most successful dinosaur excavation of all time. A phenomenal 250 tonnes of bones were unearthed at Tendaguru Hill, modern day Tanzania, and it is from this project that the majority of the exhibits are shown today. Of that palaeontological plethora many full osteological constructs were produced, but also many bones that did not form an entire skeleton were recovered. It is of these samples that via 3D scanning and printing new insights are being uncovered.

Scientists at the Natural History Museum of Berlin are using medical tomography, in the form of CT scans, to assimilate samples from the famed dig at Tendaguru Hill, and other similar finds. There has been a requirement to be able to readily access the form of the bones without the lengthy process of removing the surrounding encasing sediments, and plaster of paris, using traditional methods that can take two to three weeks per bone. 3D scanning, which the scientists at the Natural History Museum had noted being used for anatomical scanning in a nearby hospital, was realised to be a strong solution, with many additional benefits.   The team turned to the Technical University of Berlin (TU Berlin) for its three dimensional scanning expertise. TU Berlin then digitally removed the surrounding sediment as the scanning process – although using cutting-edge techniques – was not able to differentiate between the dinosaur bone and the surrounding sediment as both are compounded like a rock to a similar density. They then honed the computer models of the bones chosen for this procedure.  During this process of scanning and refining the Natural History Museum team hit upon the idea of producing three dimensional prints of these important palaeontological pleasures. 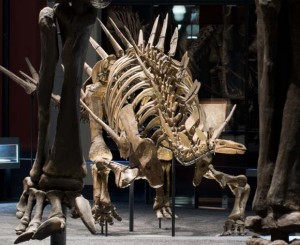 It’s here that the conceptual leap of using digital processes to access new empirical conclusions – and many hours of viewing pleasure for a museum audience of millions – from these fantastic specimens hits a new stride.

There were various fracture lines that ranged from the minor to the major, each could be edited out of the digital model; there were varying obstructions to the actual bone which were also manipulated out of the structures; also morphological data could be used add in whole missing bones to amend the skeleton to a fuller, sometimes even complete, dinosaur model. The amended computer files by themselves represent a treasure trove of data and insight, but by taking the virtual to the physical, 3D printing enabled the files to become actual models of bones for study and display.

This is one of the latest examples of 3D printing being used to look to the future to create accurate representations of the past for experiencing in the present. There have been dinosaurs galore, as a quick search of 3DPI for ‘dinosaur’ reveals… including Steve Clawson’s handy video tutorial in 3dinoprinting. The breadth of 3D-printing-for-history continues to evolve: from prosumer printed and professionally produced beautiful life-size wooden Church sculptures to the embrace of the tourist industry such as the phenomenal full replication of the burial chamber of the Ancient Egyptian child Pharaoh Tutanhamun — part of a major initiative by the Egyptian Supreme Council of Antiquities to preserve the tombs in the Valley of the Kings.