3D Hubs, is the organization that earlier this year, just over six months ago in fact, launched what they call “the world’s largest collaborative production platform for 3D printer owners and makers.” And they have been expanding apace and now have more than 1500 printers registered, 1568 to be exact. As such the company is in a rather unique position to track emerging trends across the 3D printing industry. And they know it. They have just released an Industry Trend Report on 3D printing. One of the more startling claims is that they can “shed light on one of the biggest unknowns in 3D printing: the distribution of market share in Desktop 3D printing between printer manufacturers.”

Accordingly, 3D Hubs data suggests that “Open Source based RepRaps and Ultimakers are both bravely holding significant market share in a market that is targeted by 3D printing giants Stratasys (5.1B USD market cap) and 3D Systems (6.5B USD market cap).”

Now, it should be noted that this is direct data but only in terms of the registered users with 3D Hubs, and does not necessarily reflect the global picture across makers and all industry sectors.

Regardless, this is 3D Hubs take on some particular statistics and an interesting snapshot it provides too:

“Stratasys is the market leader with 25.5% of the install base on 3D Hubs, due to the acquisition of Makerbot. However, RepRap and Ultimaker are not lagging far behind with respectively 21.9% and 18.4% of the install base. Finally, 10.8% of the registered printers on 3D Hubs are made up by a range of 3D systems machines. Furthermore, when zooming in on printer models, we note that the market is divided between a myriad of different models. We see that the top five are dominated by Makerbots, Ultimaker 1 and RepRap variations. However, there is a significant long tail of unique printers that all serve a slightly different segment.” 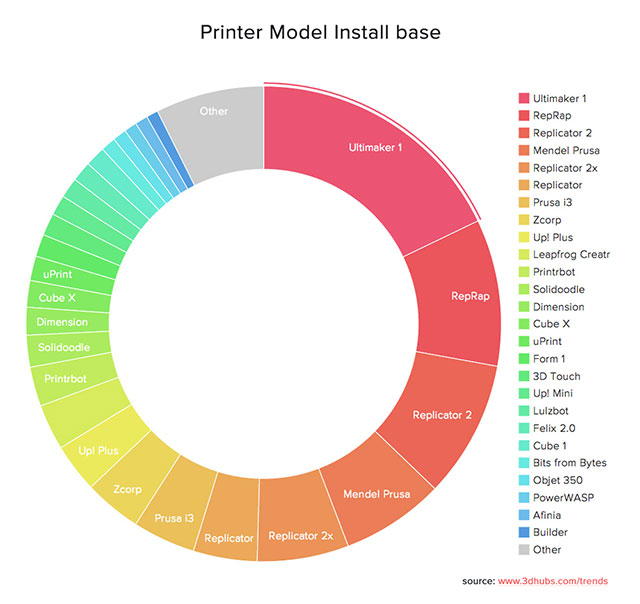 In terms of 3D printing processes, it is hardling surprising that the FDM/FFF printers dominate. However, the 3D Hubs report notes that  EOS, Zcorp and FormLabs printers (LS/3DP/SL process respectively) are increasing, which is a result of the increased interest of professional service providers in the service the firm is offering.

The full 3D Hubs Trend Report, which can be viewed here also provides insightful breakdowns on data covering geography, colour distribution, material availability, and application categories (broken down as prototypes, gadgets, phone add-ons, scale models, fashion, toys, replacement parts and DIY). One can only assume that “fashion” includes jewellery, as this would seem a glaring hole otherwise! Well, to me anyway.

I tip my hat to what these guys are doing — and sharing freely.