Guido Mandorf, a vintage tram enthusiast, living in Dusseldorf, has found a better way to bring back the past by utilising cutting edge 3D techniques, including 3D printing, to fuel his hobby.

From the age of 14, Mandorf, was already building model railroads. Carefully hand building and painting, pursuing his passion for trains & trams. Limited by a lack of space for the great train layout in his imagination, he had to wait until later in life to really devote himself to his hobby.

We had a chat about his past-time:

3DPI: How did you begin building trams?

GM: I’m a model tram enthusiast and wanted to build trams from my home city. I built many of my models by scratch-building from other model kits in 1:87 (H0) scale. With the conventional way to build models you have many limits and so I wanted to find a way to get around this. One way is to build the models with brass, but this is very difficult and requires much time and money.

3DPI: So this lead you to search out other options. How did you discover 3D printing?

GM: I read about 3D modelling and 3D printing in several magazines and online. Then I found the Dutch company Shapeways, where you can have your design printed and so I started in summer 2011 with this technique. I also use the service of i.materialise too, because they offer a real stereolithography printing method that can produce great results. 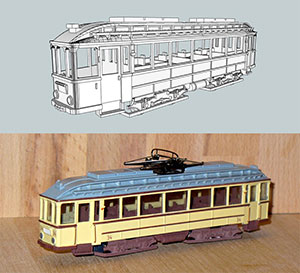 3DPI: What did 3D technologies allow you to achieve compared with your earlier efforts?

GM: It enabled me to build more detailed and finer models than before with traditional techniques.

3DPI: Do you have a preferred piece of CAD software?

GM: I´m working with Sketchup and found it really simple to learn. I studied mathematics and computer science and I’ve already used 2D design software (corel draw) previously for my brass designs. I didn’t want software that needed much time to learn. I’d rather spend my time constructing my models.

3DPI: And you create your models from original plans or photos?

GM: The originals of many of my cars don´t exist anymore. The plans for a lot of the cars are not really accurate and so you need pictures to see the original details.

3DPI: How long does a model take to build on average? A ball-park figure.

GM: Oh that depends on the model. I constructed one model on a 5-hour train ride from Munich to Düsseldorf. But for most models I need several evenings. A great advantage of 3D modelling is that I can copy and paste details like direction indicators and the mounting point for the bogies to quickly create new models too.

3DPI: So you get all your models printed in plain colour?

GM: The drafts are in white or gray, depending on the printing method. I clean them, prime and paint the models in the colour of the original. I also create the lines and letterings on the model with decals made with a colour laser .

3DPI: Your finished models are very impressive, have you ever considered selling them or distributing the 3D models.

GM: Yes I offer my models in the shops of shapeways and i.materialise. But only the drafts of the model. I don´t sell finished models or complete kits. I don’t see myself as a professional.

3DPI: So what would you really like to build if you had enough time and nothing else to do?

GM: A good question… If I had time I would maybe construct a model in a larger scale. Of course it is possible to resize my models but then I’d have to add details that are not visible in 1:87.

3DPI: We always like to see work that drives the consumer use of 3D printers

GM: I´m glad to hear that my work is interesting for other people too. Everybody can do it if he/she wants.

I’m sure you can all agree that Guido’s models are impressive whether you have a passion for trains or not. See more trains and trams (in German) at: www.tramspotters.de or on facebok www.facebook.de/tramspotters.de