Knowing Maggie Philbin’s background – a technology orientated BBC presenter, who has set up her own children’s ‘TeenTech’ enterprise to counter her frustrations at the UK government’s “lack of action” – she seemed a perfect choice to Chair this year’s UK Manufacturing Debate hosted by Cranfield University. The topic – Does the UK need a manufacturing strategy?

Also knowing that TeenTech focuses heavily on raising kids’ awareness to the potential of emerging technologies such as 3D printing, it was certain that Maggie would champion their cause within the debate. She didn’t disappoint but, wondering whether she heard enough from the assembled officials, academics and business figures on the subject to counter her frustrations, I caught up with her afterwards. 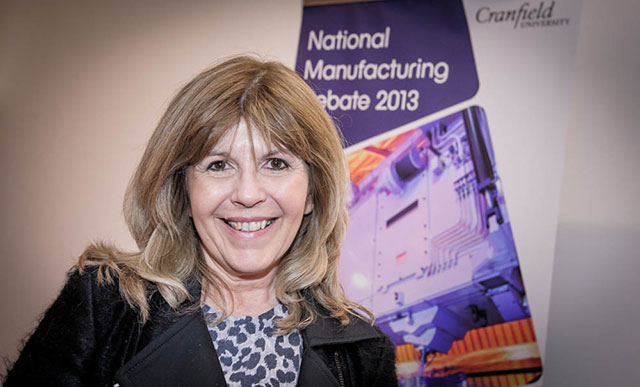 The comment that stuck in my mind from the debate came from Mark Claydon Smith, Head of Manufacturing at the UK’s Engineering and Physical Sciences Research Council (EPSRC). He commented that “probably the most important decision people make in their lives is education choice. It has huge economic consequences.” Did Maggie hear enough from the debate to suggest that these words were translating into significant action?

“I think things are beginning to change but too slowly. One the reasons we set up TeenTech was to target young people just before they make their GCSE (high school exam) choices so they fully understand how certain subject choices will open more doors for them than others.”

“We know from our research that young teenagers wouldn’t dream of asking their parents or teachers for advice about their next mobile phone – but they do rely on them for advice about careers and parents and teachers are woefully out of date. If you’re bright, you’re encouraged to do medicine or law. Frustratingly, students who might really benefit from taking a different training route are still being encouraged to go on to University, never mind how weak or irrelevant the course might be. It seems quite bonkers to me that schools are incentivised and rewarded for sending students to University rather than being encouraged to alert them to the gold star apprenticeships run by companies like Airbus, Cisco or the BBC.”

“We all need to help parents and teachers understand the real potential of engineering and manufacturing and we need to be giving some very precise advice and examples. Parents want the best for their kids but very few realise what the real landscape of future employment looks like.” Maggie went so far as to suggest in the debate that government should reward individuals from business who bridge this gap with tax breaks.

On the subject of the skills required to enable the full potential of the UK’s manufacturing sector, the debate not only recognised the criticality of fuelling this talent pipeline from such an early age, but acknowledged that the UK already has a shortage of skilled engineers – such that employers are having to court individuals from countries with a surplus, such as Italy and Portugal. Add to this the findings of a recent study by the Prince’s Trust, The Start UP Generation, which reports that 45% of young people predict that developments like 3D printing and robotics will lead to more entrepreneurs in the future, and we return to the key subject of the debate (at least from UK plc’s perspective). Will the endeavours of individuals and enterprises like TeenTech be enough to sustain the UK’s manufacturing potential from a skills perspective, or is a bolder strategy required?

The shortermism of the political system, which limits the ability to lead a strategy for the maximum in-term potential of five years, was continually referenced whenever the potential of the government taking a lead came to the fore. One government’s influence on curriculum and careers advice and guidance can be undone in a heartbeat by the next. A decision to triple university fees will certainly raise students’ expectations of a return on their investment – at least to the extent that the degree that is being taught is wholly relevant to the outcome that business requires. Moves  by companies such as those that Maggie mentioned to bespoke higher level apprenticeships as degree level equivalents suggests that they feel that influencing the output of the entirety of the UK’s Higher Education system is too tall a short-term order.

So, with no consensus on who could (never mind should) lead any such UK Manufacturing strategy emerging from the debate, we remain reliant upon the laudable endeavours of a sum of component parts. These include the Technology Strategy Board’s and EPSRC’s funding and excellent support to help enterprises commercialise their inventions and innovations. It also notably includes the passionate endeavours of individuals like Maggie, Malcolm Napier from E-mpirical Ltd and hundreds of other trailblazers who refuse to allow the next generation of talent – the very one that UK manufacturing so desperately needs to enthuse its way – to be short-changed.

“I don’t think we can wait for curriculums to change. We really need to be doing something right now or thousands of young, bright people are going to find themselves in a world where they won’t be able to get work,” Maggie concludes. And without them, the UK will fail to realise the potential of the very technological advancements that it has been so instrumental in bringing about.

Belinda Johnson is owner of employment research consultancy Worklab (www.work-lab.co.uk), and an Associate at the AM/3DP consultancy Econolyst (www.econolyst.co.uk). Having spent most of the last decade researching the forces that impact the way organisations work, her interest in 3D Printing stems from her belief that it is a disruptive force of the like that we rarely witness.