In a time when 3D printing has already covered – often literally – your iPhone, it was only a matter of time before the tech entered the space inside of the device as well. Torus is an accelerometer based puzzle game bringing all this together in your iOS device (from v. 2.2.1 up).

The general idea of the game is to catch tori with a hook as they are falling from the sky using the built-in accelerometer i.e. tilting the device. Other playing aspects are also quite simple as and in the traditional unlock-as-you-progress scheme, different awards are unlocked after reaching specific score levels. However, this is where 3D printing comes in, as the awards for progression in Torus’ case are 3D printable tori, which can be ordered from Shapeways. 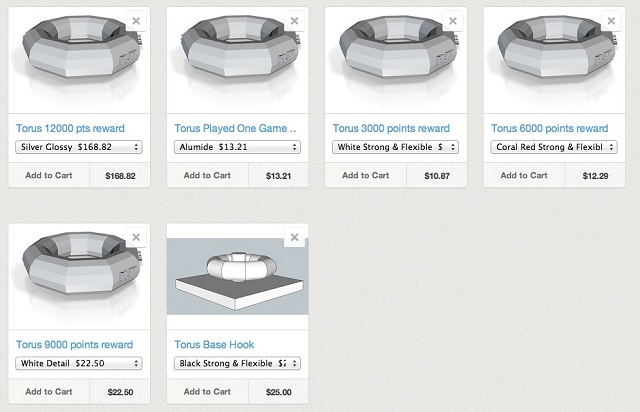 The tori are laser sintered and sized up to 1.6 x 0.4 inches. The hook – its cylinder measuring 0.3 inches – can also be 3D printed and ordered from Shapeways, so you’ll eventually be able to recreate the playing experience in your own living room – but to do this, you will need to dig deep into your wallet.

Below is a short and grainy video clip of the game – which you will also notice to be from late 2008. This is undoubtedly something that we will see more of in the future – different concepts being given a new lease of life by adding the IRL into the mix with 3D printing.

Want to give it a go? Torus is free to download –  just hit the source link to start playing.