In 1982, solar pioneers Hans Tholstrup and Larry Perkins, embarked on a quest that would see them drive a home-built solar car Quiet Achiever across Australia from west to east. Inspired by this achievement and his own pioneering vision, Hans urged others to explore the boundaries of sun-powered transport.

And so the World Solar Challenge was born.

That excerpt, taken from the World Solar Challenge website, describes the distant beginnings of solar-powered car travel in Australia. It’s now 2013 and, though solar-powered travel isn’t as prevalent as Hans would have liked, technological innovations have made the refinement of solar transportation possible. This year, in the World Solar Challenge, which pits teams against each other to build their own cars and race across the vast Outback of Australia, the crew from the University of Minnesota utitlized 3D printing to fashion an automobile that was perfect for contest. 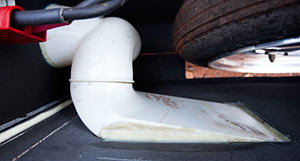 The use of a Stratasys Fortus 3D Printer proved to be ideal for creating parts for Daedalus, the University of Minnesota’s solar cruiser, because, as the car was a one-off, fused deposition modeling would allow for custom parts that could be both complex and lightweight, while fitting into the team’s budget. The Stratasys blog describes what materials were used to construct which parts of Daedalus. ABS-M30, light and cheap, was used for the venting of the vehicle, as seen in the photo to the right. ULTEM™ 9085 resin, on the other hand, was preferred for parts with higher performance requirements, including the motor assembly. Together this permitted the team to 3D print the “ducts, vents, fairings, driver display components, battery cells, and motor assembly”.  Stratasys quotes the team’s leader, Neil Dencklau, in describing why 3D printing was chosen for their vehicle:

FDM has changed the way we look at the design and production challenges on this project. One of the best examples is how we designed and assembled the motors, specifically how do you glue 80 magnets to the inside of a steel ring with any level of precision? Using ULTEM we were able to make an assembly jig that could be glued into the rotor, be strong enough to withstand the repulsive forces of the magnets while the parts were baked, and be light enough to be left in serving as an aerodynamic component once the parts were done.  One of my favorite FDM components on the car would be the ducting system for battery cooling. FDM allowed us to put the ducts right next to the batteries and still have a clean flow. 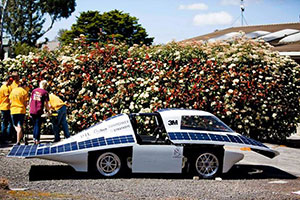 The University of Minnesota’s Solar Vehicle Project has been making solar-powered cars since 1991 and has continued to make improvements to their designs over the years; this one has two seats and a radio! At the time of writing, Daedalus is in 4th place in the Cruiser Class race.

You can watch the entire progress of the race on WSCTV (World Solar Challenge TV).  Below is the installment from Thursday, October 7th, when the winner of the Challenger Class was determined:

If I were a media mogul[1] who cared about creating a successful TV network, I would go along with Bloodhound TV and my own (yet-to-be) show called Top Maker, about Makers competing to build stuff, on a single channel.  With the burgeoning interest in new technology and DIY, I bet it’d catch on quick.  But what I wish would really catch on quick is sustainable power in general. With all of these contests and demonstrations of the possibilities of green energy, when can I get a 100% sustainable car? Where’s my solar-algae biofuel hybrid?