The Potential for W. Afate, the First 3D Printer Created from e-Waste

In May, we covered the story of Afate Gnikou who had taken to resolve the problem of e-waste, created by first world countries and deposited in third world countries, by transforming leftover computer, scanner and engine parts into a 3D printer.  Since then, Gnikou has accomplished the task of completing his W. Afate RepRap 3D printer.

After receiving €4,316, 123% of his funding goal on ulule, Afate was able to create the prototype of his RepRap-style printer. Due to the use of recycled rails and belts retrieved from a garbage dump in Lome, the total cost to build the printer was about $100.  The printer is also a part of a larger project to send W. Afate to Mars in order to construct lunar habitats, for which Afate and his teammates won the NASA International Space Apps Challenge in Paris. As Afate told News53: “My dream is to give young people hope and to show that Africa too has its place on the global market when it comes to technology.  We are able to create things, why is Africa always lagging behind when it comes to technology?” 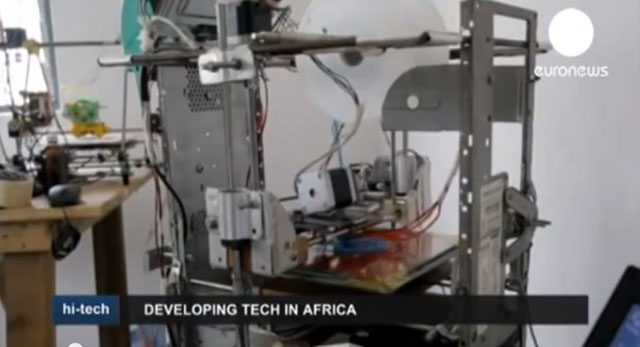 The W. Afate is a successful demonstration that 3D printing might be used to increase economic development in the developing world, ideas heavily endorsed by the charity organization techfortrade and Michigan Technological University’s Lab in Open Sustainability Technology.  Pearce, et al. of the Michigan Tech lab explains in “3-D Printing of Open Source Appropriate Technologies for Self-Directed Sustainable Development”:

It is critical that feed stocks be developed from locally-available materials in order to prevent the erosion of cost advantages for local production. Using locally-available materials for fabricating OSAT not only ensures the community in question will be less dependent on foreign assistance if there are problems with the technology, which currently is a frequent occurrence (RepRap, 2010; [email protected] 2010), but it also creates a sense of empowerment as technology is not handed out as a form of charity furthering dependence on foreign aid (Gellerman, et al., 2009). This can be accomplished through the use of feedstocks created from waste products (e.g. plastic bags) or through the use of available local materials such as bio-polymers. The sheer abundance of plastics in household waste (including bags, bottles, food and entertainment packaging) is a reality in most non-rural communities (Al-Khatib, et al., 2010; Phillipe & Culot, 2009), but this waste can be reused.

What the aforementioned groups may not have immediately predicted is that the structural parts of the printer may be made from recycled parts, as evidenced in the W. Afate 3D printer.  And, if solar power can be used to drive such a machine and filament can be created from waste plastic, as the Michigan Tech paper suggests is possible, the W. Afate machine could become the prototype for an (almost) fully-sustainable 3D printer.  At the same time, it has the possibility to alleviate poverty, by providing a means of economic development for Makers like Afate and as a local hub for the production of cheap household necessities. With these two possible effects combined, this hypothetical printer could reverse the negative state of the world today, as described by Michigan Tech’s Prof. Pearce in “The case for open source appropriate technology”:

Even a superficial review of global environmental conditions results in a rather bleak outlook for the sustainability of the world’s major ecological systems. Simultaneously, billions are mired in poverty, and even those in the developed rich countries find their economic situations uncomfortably precarious.

To me, the W. Afate project is the symbol of something truly inspiring, even at its very early stages, and represents the potential for grass-roots, open source movements everywhere.  For more developments on the project, follow Afate on Twitter.  And for the full News53 Segment, watch below: