SSC stands for supersonic car, for supersonic humanity breaking free from its mortal coil. And the British-made Bloodhound SSC hopes to stand for breaking the world record for the fastest car on land, currently held by the (also) British-made Thrust SSC, by a 33% margin at 1,000 miles per hour.  But the nose of a car is like the nose of anyone else, a big one can weigh its owner down. That is why the team behind the Bloodhound has turned to British manufacturing firm Renishaw.

Renishaw is joining a team that already consists of Swansea University’s College of Engineering, engineering firms Hampson Industries and Cosworth, rocket scientist Daniel Jubb, and £15 million in sponsorship funding. The manufacturing company’s contribution will be to produce the prototype for a 3D printed nose tip for the SSC. By laser melting bits of titanium with their AM250 machine, Renishaw can create a structure that is partially hollow, thus reducing drag.  The Bloodhound’s lead engineer in charge of materials, process and technologies, Dan Johns, considers the possible role of 3D printing in the project:  “We believe that the key benefit of using an additive manufacturing process to produce the nose tip is the ability to create a hollow, but highly rigid titanium structure, and to vary the wall thickness of the tip to minimise weight. To machine this component conventionally would be extremely challenging, result in design compromises and waste as much as 95% of the expensive raw material.” 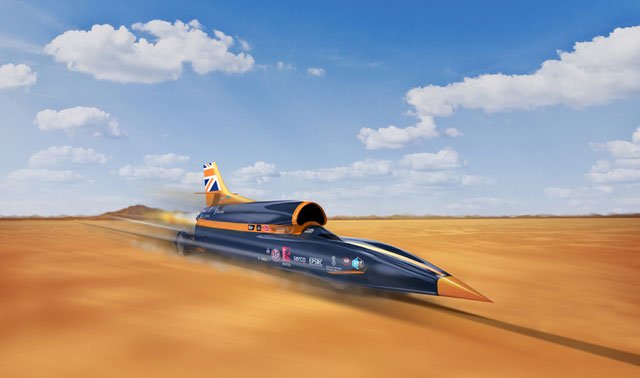 According to Wikipedia, if the team can succeed in engineering this three-engined machine, then, “as the car accelerates from 0-1,000 miles per hour (1,609 km/h) in 42 seconds,” Andy Green, the car’s driver and also the driver for the Thrust SSC, “will experience a force of approximately 2.5g (two-and-a-half times his body weight) and blood will rush to his head.”

As a side benefit to rushing blood to Andy’s head, the Bloodhound project is meant to increase interest in STEM education for students across the UK and South Africa, where the car’s run will take place. Any educational institution in those two countries can request that members of the Bloodhound SSC team give educational presentations to their classrooms and anyone can download a set of free curriculum resource materials to educate students, using the supersonic car as a way to get them engaged in science and engineering. 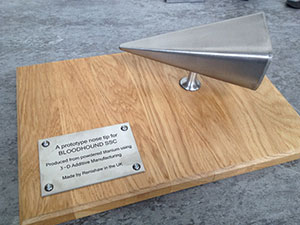 At the official opening of the Bloodhound Technical Centre in Bristol where the supersonic car is being put together, the UK Minister for Universities and Science, Rt Hon David Willetts MP, announced that, in order to support the educational arm of the project, the Engineering and Physical Sciences Research Council (EPSRC) would be donating a £1 million grant. Willetts received a plaque, complete with Renishaw’s laser-melted prototype nose, to commemorate the event.

If the educational outreach team of the Bloodhound is as good as its marketing team [Ed: It is, I’ve seen it!] my days dreaming may be able to come to a close as young engineers and scientists 3D print a world of rocket cars all for me. Just take a look at Bloodhound TV’s sleek promotional video on 3D printing: