Last month, we told you about two contests being held by the Nanyang Technological University (NTU) in Singapore, one devoted to 3D-printed fashion and the other dedicated to reinventing the abacus, but what we didn’t tell you much about was NTU’s brand new Nanyang Additive Manufacturing Centre (NAMC).

In an effort to become one of the leading countries in 3D printing technology, supported by Singapore’s Economic Development Board (EDB), the university is in the process of constructing its $30 million NTU Additive Manufacturing Centre, to be opened in May of 2014.  The center will not only house the latest 3D printers – including SLM250HL, Objet, and Zcorp machines – for graduate and undergraduate students to use in their research, but also Singapore’s first 3D bioprinter.  And, it seems, the bioprinter will be in good hands.

In 2003, Professor Chua Chee Kai, Chair of NTU’s School of Mechanical and Aerospace Engineering, used 3D printing to transform a CT scan into a replica of a patient’s skull on which to rehearse a cancer removal surgery.  More recently, Prof. Chua, accomplished the task of printing biodegradable scaffolds for bioprinting and submitted a government proposal for $25 million to print a lung using stem cells.  Prof. Chua had attempted to secure government funding for 3D printers in the past, telling The Straits Times, “When I first tried to get funds from the Ministry of Education to buy a 3D printer for metals, I got shot down. The next year I tried, I got shot down. I hope the government will give us money to educate people now because I don’t want to be following others always.” 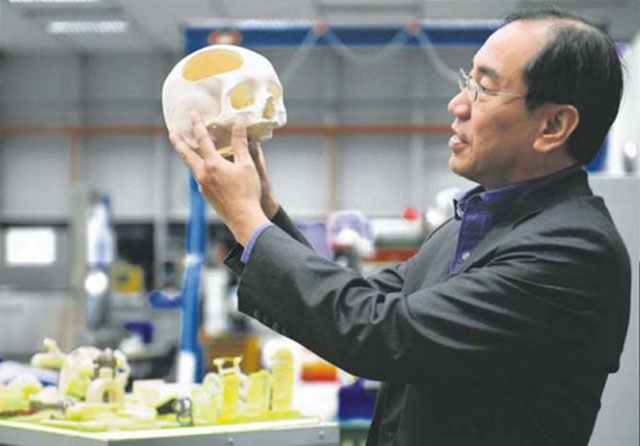 With Prof. Chua’s requests finally answered, the NAMC will provide a PhD program in AM, as well as minors/specializations for Mechanical and Aerospace Engineering students pursuing their Masters in Precision Engineering, Mechanical Engineering and Manufacturing Systems and Engineering. Undergraduate students will be able to pursue independent research in 3D printing through NTU’s Undergraduate Research Experience on CAmpus (URECA) program.  The center will have direct ties to industry projects that will both advance the country’s research in the field and to the direct development of new products.

The 300m2 center is working on creating new software, technologies materials, and applications.  Here are just a few areas and projects that the centre is pursuing, according to the NAMC site:

Singapore’s Economic Development Board has set aside $500 million over the next five years to nurture the country’s growing AM sector.  There is a bit of worry that 3D printing may be overhyped. As Dr. Ian Gibson, Associate Professor at the Engineering Design and Innovation Centre of the National University of Singapore, told Channel NewsAsia, “There is some suggestion to say that the market is over inflated in terms of capital investment in that technology bubble that may burst. That is a necessity — that may happen.” The bursting of a 3D printing bubble would surely affect companies like Singapore’s Prototype Asia, which saw a growth of S$350,000 in 2011, to S$750,000 in 2012 thanks to the worldwide interest in the technology.

CEO of Prototype Asia, Benoit Valin, will be speaking at the Inside 3D Printing conference in Singapore in two weeks, along with Dr. Gibson, who will co-chair the event with 3D Printing Industry’s own Ari Honka and Eetu Kuneinen.