Sculptor Richard Loffler has been creating breathtaking works of art from cast bronze for three decades now. Some of his work sit in museums, national parks and have been featured in exhibitions all over the world. But have you ever wondered how massive bronze statues are made? Luckily, Loffler’s son is a Redditor and he decided to share his father’s creation process with the reddit community.

Under the username Biggieholla, Loffler’s son posted a large gallery of images of his fathers work on the r/pics subreddit, which boasts seven and a half million subscribers. The first image in the gallery is of a commissioned work depicting a 150% scale herd of buffalo.  The sculpture took Loffler five years to complete, so the steps involved in the creation of these incredible statues are obviously quite time consuming. On it’s own, the traditional process to make these sculptures, detailed in the first half of the gallery, is fascinating.  But I was surprised to learn that, recently, Loffler had added 3D printing to the absurdly long list of steps involved in creating his artwork. 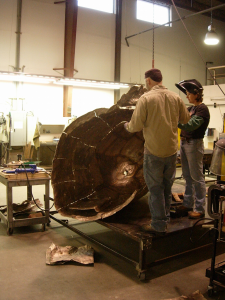 In the case of the buffalo herd, the sculptures start off as a small maquette version, so he can make sure the piece works as a whole. Then, he brings in huge slabs of foam that he carves into the rough shape of the subject. At this point he begins the tedious process of coating the foam with clay and hand sculpting in each and every fine detail. Once dried, the mock-up is cast in plaster and divided into dozens of smaller parts.  These parts are converted into molds and sent to a foundry for bronze casting. The parts are then welded together and the metal smoothed and finished with a natural patina.

The entire process sounds exhausting, so it is of no surprise that Loffler was willing to try any new technology or work processes to cut down the time required to finish his sculptures. In this case, rather than hand sculpt the foam into the desired shape, he simply has his maquette scanned and then 3D printed into a foam material that can be assembled in his workshop.

This latest statue is of a massive moose, and once the 3D printed parts are assembled it looks like it easily stands at twenty feet tall. Despite the final version of the mock-up being sculpted from clay, the foam still needed to have an incredible amount of detail. Clearly a tremendous amount of time was saved by 3D printing the rough shape of the moose rather than hand carving it. 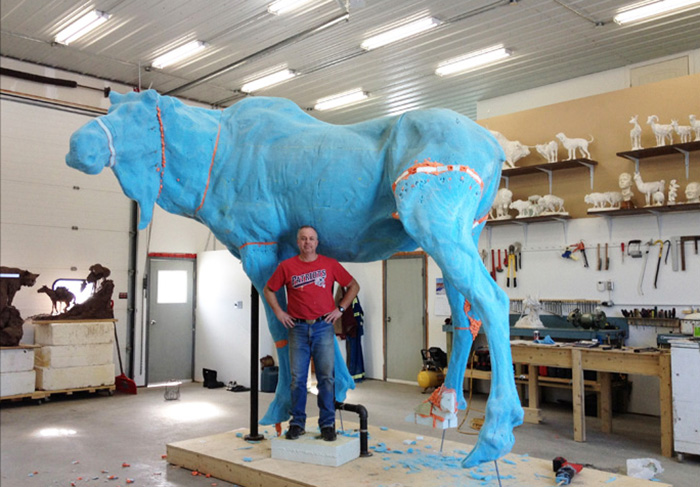 At this point the process is the same as the traditional construction that has been fully detailed in the gallery posted by Loffler’s son. The moose is coated with a thin layer of clay and the fine details are sculpted. It will then be coated with plaster with the subsequent molds sent to the foundry. 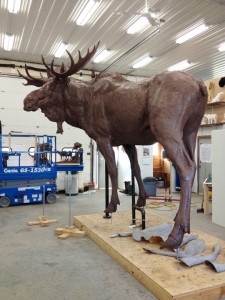 This statue is still under construction, and, unfortunately, there was no word on when it is scheduled to be finished. However I’m already impressed with what we’ve seen, and I can almost imagine the final shape. And, thanks to 3D printing, we will have to wait a little less to see it than we would have previously. You can find out more about the beautiful sculptures of Richard Loffler on his website, and you can read some of the questions answered by his son in the Reddit thread here.