Sculpteo, one of the three leading consumer-oriented on-demand 3D printing service networks, has published a study demonstrating that it is more affordable to have an item 3D printed by a professional service than to do it yourself, at home, with your own 3D printer.

It probably won’t surprise many of you that a service provider would publish a study of this nature with such favourable results. While Sculpteo did commission the study, it was conducted independently by State College Industrial Design graduate Martin Toulemonde, who picked a total of five items: three basic ones (a space invader ring, a mini-figurine and a GoPro mount) for a wide consumer target, and two more complex ones (a brain gear and a mathematics model) to evaluate the possibilities.

The comparison was made between Sculpteo’s service and a total of seven different 3D printers from entry level through to mid-range professional machines. These included an FDM Makerbot Replicator 2X and an SLA Form 1 for personal hobbyist machines. The professional machines covered a price range of $10,000 to $43,000 and included a Stratasys Mojo and a uPrint SE Plus, as well as a Polyjet based Objet 30 Pro. The other machine included in the study was a ZPrinter 250. 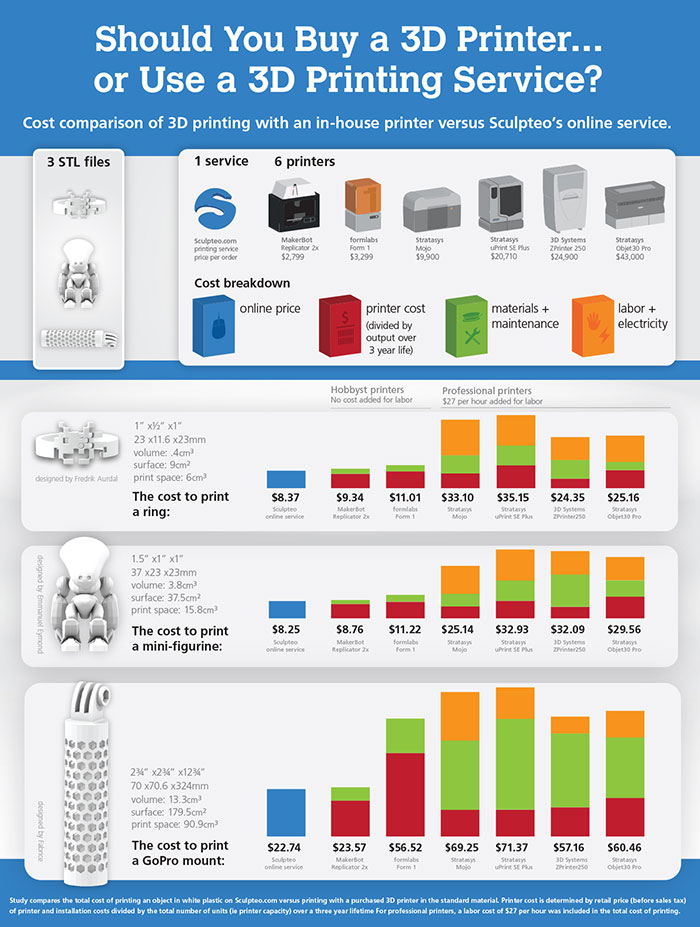 The main conclusion that Toulemond came to is that Sculpteo’s pricing is comparable to the final cost of 3D printing at home with a Replicator 2X or a Form1 machine, while, for small sized objects, it is far lower (as much as a third) than the cost of using a professional machine.

These results, however, are inextricably linked to a series of variables that could only be estimated, the most important among them probably being product quality. Although it is not the only factor to be considered.

For its production for the parts in this study Sculpteo uses an SLS machine and white nylon thermoplastic, which ensures the highest quality, comparable only to the Polyjet printing done by the $43,000 Objet 3D printer. What the study fails to consider (or purposely did not consider) among other things, is the IKEA effect: that is the higher perceived value we attribute to something we made ourselves. An object printed at home may look uglier but it may be worth more to its creator than something ordered online.

That said, Toulemonde had to calculate the exact cost of 3D printing something at home by assigning values for investment machine costs (divided over a period of 3 years, which was considered to be the average lifetime of a 3D printer) and by dividing it by the estimated total number of prints that can be done over that period. This was calculated by taking into consideration the maximum printing volume and multiplying it for the times it could be reasonably used over the machine’s average lifetime.

These costs were then factored in with costs of electricity and maintenance, also estimated according to each machine’s specific characteristics. Although all these variables can “vary”, the study does demonstrate a level of understanding of 3D printing dynamics by its author. However, while in the manufacturing of complex parts arena, Sculpteo needs to overcome a professional’s desire to retain more control over the 3D printing process, in the consumer arena the IKEA cognitive bias is likely to remain a major hurdle, as it is not easy to convey the real value of a 3D printed object when the 3D printing process does not take place right in front of one’s eyes.