Scan it Straight to Your Smartphone with the eora 3D Scanner

As the capabilities within smartphone and 3D printing technology expand by the second, we are now bearing witness to the many ways that these two technologies can be combined in order to complement one another. One optimal example of this tech-collaboration is the eora 3D Scanner, a high-precision scanning device that attaches to your smartphone.  The eora, previously covered on 3DPI, is now making its way from the Sydney Maker Faire, where the scanner was unveiled last August, to a promising Kickstarter campaign, where the eora 3D team is releasing it to the public at an affordable cost ($199 for 3D scanner/ $259 for 3D scanner with Bluetooth Turntable).

The eora 3D Scanner is compatible with both iOS and Android smartphone software, and is completely app-driven and easy-to-use. What makes this scanner special is its green light laser, which contains a glass lens with anti-reflective coating and has a wavelength of 520 nm. The range of the scan reaches up to 3 feet, and has a robust capture size of 3 feet x 3 feet, as well.

Although these scan limitations only allow for small-to-medium sized objects to be scanned, the resolution of the eora 3D scanner is 8 million vertices, making for an extremely precise and high-quality 3D scan, especially for the scanner’s compact size. Not only does the scanner capture a high-definition scan, it also does it extremely quickly, boasting a total scan time of just five minutes. After the scan is completed, the 3D model of the selected object will display itself on your smartphone screen, giving you direct access through the eora 3D application.

“The most unique feature of the eora 3D Scanner is it’s green laser,” said co-founder Richard Boers. “CMOS sensors in modern cameras are twice as sensitive to the green spectrum than any other, this allows you to scan in a variety of lighting conditions and results in more precise 3D Models.” Also available, alongside the eora 3D Scanner, is the Bluetooth Turntable, which is an independently functioning device that spins objects 360 degrees in order to optimize 3D scans.  With or without the turntable, scans can be exported as .stl, .obj, and .ply files and, through integrated plug-ins, uploaded directly to Shapeways or Sketchfab. 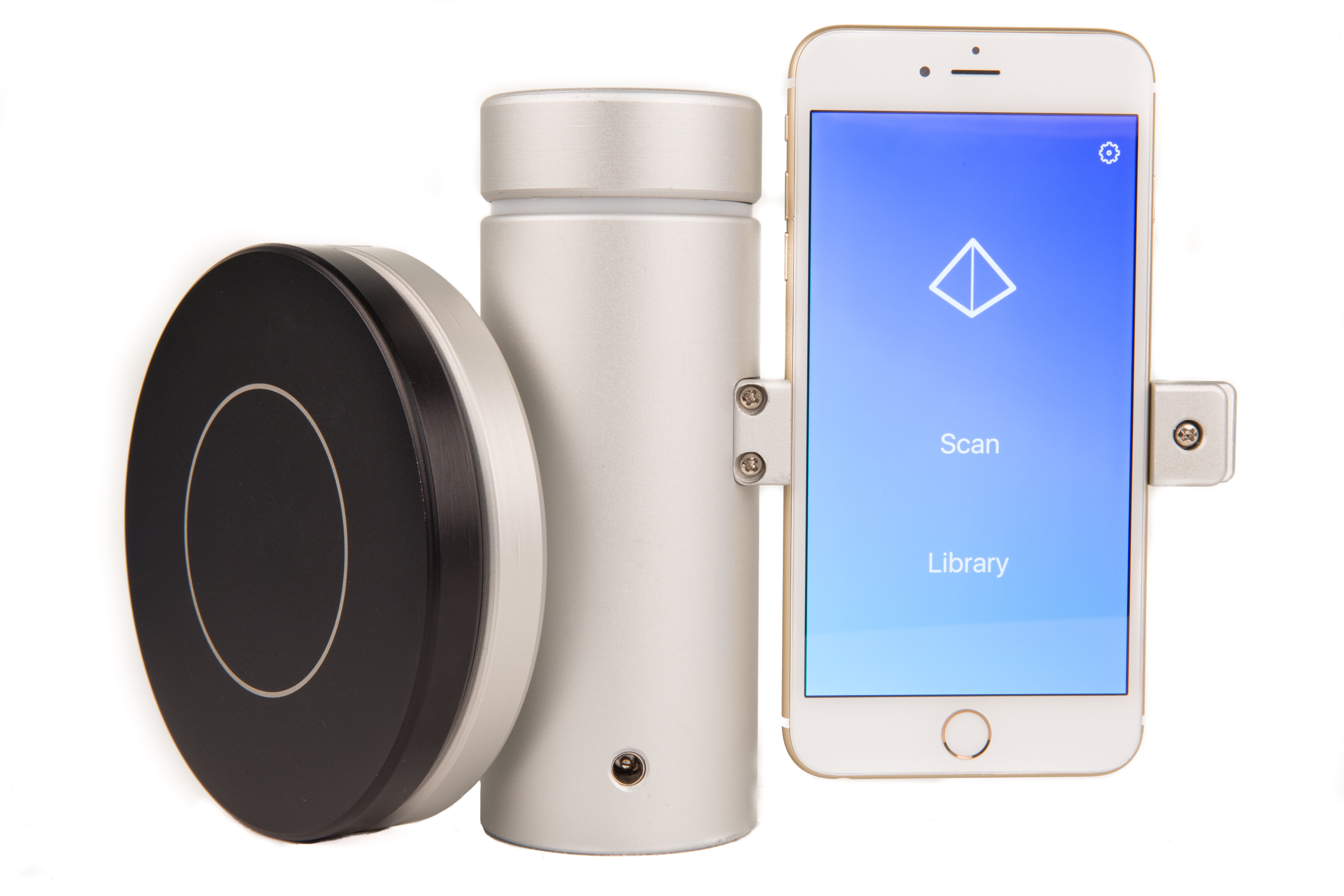 Their Kickstarter has just gone live, where those interested in the scanning attachment can invest in owning both the 3D scanner and the Bluetooth turntable for an amazingly low price. Plus, anyone who backs the campaign receives $10 in 3D printing credit on the 3D Hubs network. The eora 3D Scanner comes in a silver or black finish, and ultimately resembles a tiny R2D2-like robot who is holding up a smartphone, attempting to reach out and 3D scan the entire galaxy in front of it. With a sleek design and a focus on quality scanning, eora 3D may have just set a precedent for smartphone-compatible 3D scanners.  Check out their campaign page, or watch the crowdfunding video below, for more information.

UPDATE: 10/20: After a successful Kickstarter launch, the eora 3D team released this message:

“We are extremely overwhelmed by the response we have received for our Kickstarter campaign by hitting the goal in under 3 hours!! We cannot wait to ship our scanners and delight our backers.”