Last week, we covered the Lionhead 3D printer and its launch on Kickstarter, but I wanted to elaborate a bit on a couple of important aspects of this machine, the Radiant Li software and some of its automated components, that impact its adoption by the world at large.

Now, at the Radiant Fabrication website, you can download a beta version of the Li software so that you can try it out before the printer hits the figurative shelves. Here’s a tutorial that goes through the entire process of building a model using Li, in case you run into problems: 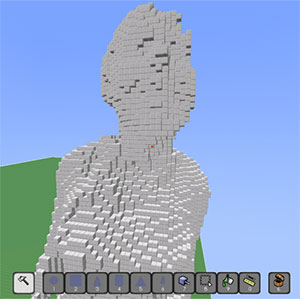 The interface is very video gamey, with sound effects and a first person POV, making it pretty intuitive for gamers. You can even strafe and fly, making the camera much easier to use than in other modelling programs, like Blender. It’s easy to import .stl files, but they haven’t made it so that you can export them, yet.

Li, as previously discussed, is a voxel based program modelled after games like Minecraft.  Objects are made using discrete .5 millimeter blocks assembled like legos. As you can tell from looking at an import of my new bride (right), this limits the resolution. I tried to make her big enough for her face to be recognizable, but then she exceeded the size of the workspace. You can’t tell who it is, but the use of this Minecraft-esque interface, along with the built-in auto-calibration of the machine’s scanner and printer, will make the Lionhead much more accessible to young kids. 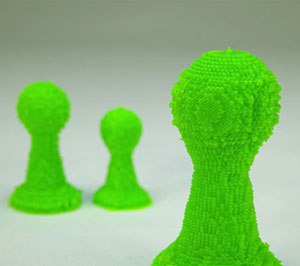 In our conversation with Abe from 3D Systems, at Inside 3D printing in San Jose, the CEO expressed, to my then fiancé, now wife, and I, his desire to direct the skills of young tech savvy kids towards creative endeavours. Young people already familiar with how to play a variety of video games, including Minecraft, should, ideally, have no problem working with 3D printers. And the Radiant Li software takes advantage of that skill by making it so that, if you can already play Minecraft, then you’re already capable of creating 3D-printed objects. The fact that the printer automatically calibrates its print platform before each print, to increase repeatability, and uses multiple heads, to increase speed and parallel printing, will also make the device less frustrating to use. The easier it is to use, the less steep will be the learning curve and the more readily kids will be able to get into 3D printing. And, as we all know, children aren’t the only ones playing Minecraft, so the Radiant Fabrication approach to 3D modelling may make the technology more accessible to some adults, too.

For those of you who are somewhat taken aback by the lack of definition on these 3D-printed voxels, know that the Radiant Fabrication team is working on the ability to scan and print in a higher resolution. To me this is only the beginning for the Lionhead 3D printer and Radiant Li software because, once they’ve proven how easy it can be to scan, model and print 3D objects, then they will be able to receive funding to develop even better printers as easy to use as their current models.