The universe is infested with dangerous monsters threatening all life! An outcry which sounds quite ominous, but despite the immediate associations to colonies of planets struggling under an Ridley Scott directed Alien regime, it’s not an introduction to a dystopian sci-fi movie, but to an independent game from Taiwanese Qubit Games called the Space Qube. The game caught the general public’s eye at this year’s Tokyo Game Show with a clever concept of combining old school shoot ’em up design with 3D printing elements – by offering a chance to first design a personal space ship to battle the evil space villains and then easily sharing and 3D printing it for the physical world to see and behold in awe.

The gameplay itself is pretty much as simple as this category of games gets – control the vessel of choice, destroy enemies whilst trying to avoid their fire and of course collect additional power-ups and other momentary bonus objects – all in that appealing pixelated visual world. But this basic set-up is where the conventions end and the power of voxel design takes control. The in-game editor makes for a significant part of the total gaming experience where the user can create a space ship — which can look like anything imaginable — from the ground up according to his/her vision with building blocks gathered from destroyed enemy vessels (or purchased in-app). These personal designs can then be ordered as 3D prints and could look something like the more classical ship shapes as in this story’s feature image — orlike toilets and reindeers! 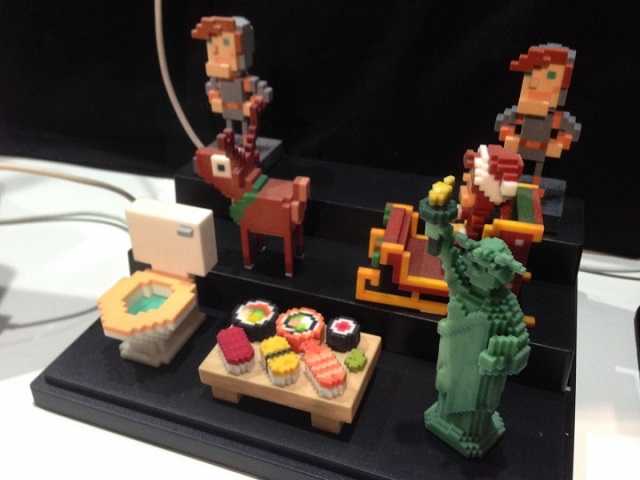 Incorporating 3D printing like this could really add value to the gaming experience – it’s not a pretentious sideshow but actually brings something new, innovative and socially participatory to the table. Basically it’s not as superfluous as some of the tragicomic corporate 3D printint carnivals, which have clearly been made up at a suited up table filled with 40-somethings trying desperately to get inside the heads of the playing crowd five minutes before the project deadline – in order to achieve that ambiguous ‘cool factor’.

If you want to see what the actual space ship design process looks like, below is a video of it – which also clearly demonstrates the possibilities and limitations of designing a game in the voxel world of Space Qube – and also why 3D printing can really shine in the concretization of the vessels.

Because the rights issues are handled properly regarding the user-slash-designers, these figures aren’t bound to be pulled off the market like the Final Fantasy VII ones of which designer Joaquin Baldwin had a short success of selling before the developer decided to hold firmly on to their rights to the characters. But maybe if the game does take off and the players having created the most popular ships start selling them in large quantities, things might change.

If you want to take a closer look at the game itself, head over to their site here or if you own an iOS running device and have $2.99 burning in your pocket, the game’s available for download from Apple.