“When I read your article on the Samsung X project, I knew I had to give you a call because I was like, ‘that’s what we’re doing right here in Albuquerque.” This was the pretext for Max’s call. When I spoke to the CEO of 3D Proven Systems, a 3D Systems dealer in Albuquerque, New Mexico, I had no idea what product they were aiming for. All Max told me was that he wasn’t just in the 3D printing space, but in the VR and AR space as well, and that, in a few months, he and his team were going to launch a Kickstarter campaign for a product that would combine all of those technologies. 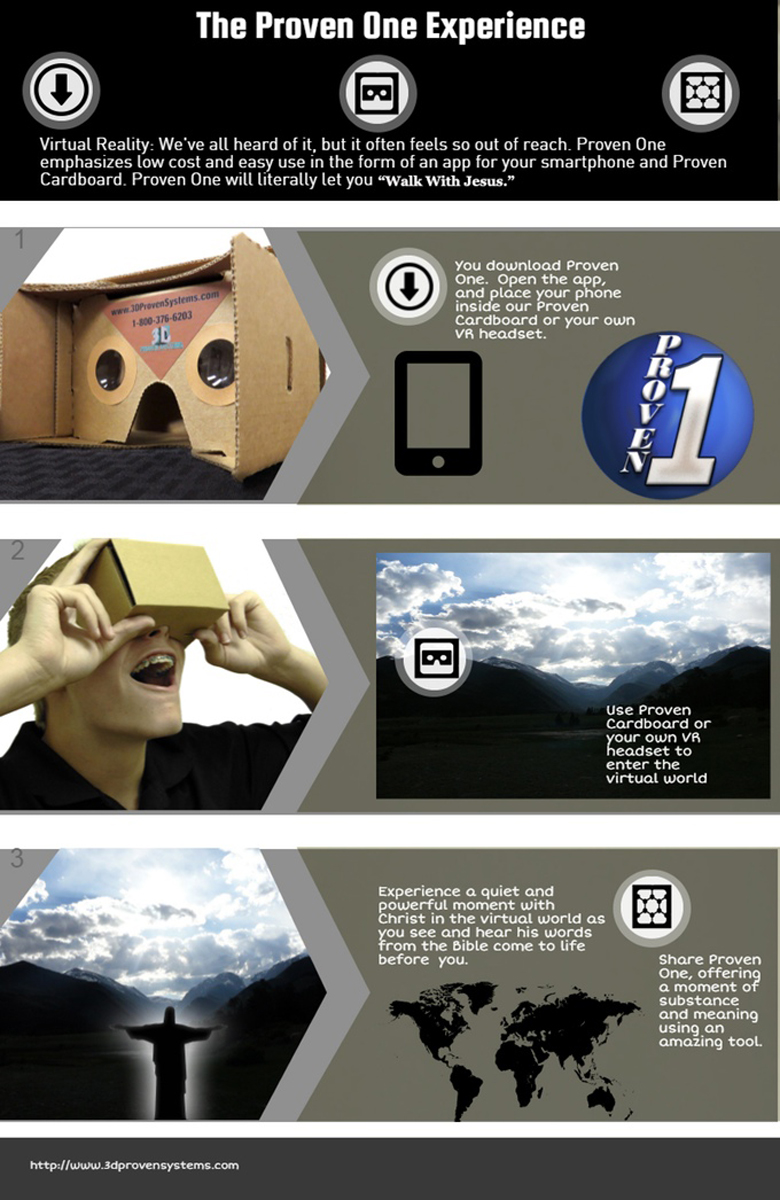 In addition to selling 3D Systems printers, Max has been manufacturing what he calls Proven Cardboard, a VR headset made from cardboard procured through his large business as a box manufacturer serving the greater Southwestern US. What separated his product from Google Cardboard, however, was that it was verified to work. He said that he had modified the design slightly to ensure an even better VR experience than the Google counterpart. To demonstrate it, he sent me two headsets – though I could never quite get them to fit my iPhone (not optimally suited for Google Cardboard) quite right.

Yesterday, however, as I was moving across country with my wife, cat, and bearded dragon, I got a call from Max telling me that the project was about to go live on Kickstarter, which it is now. What I had prepared for in my head was something related to VR, AR, and 3D printing, but nothing more. I certainly wasn’t prepared for what I saw when I clicked on the link sent to me by 3D Proven Systems Chief Creative Director Weston Brownlee. 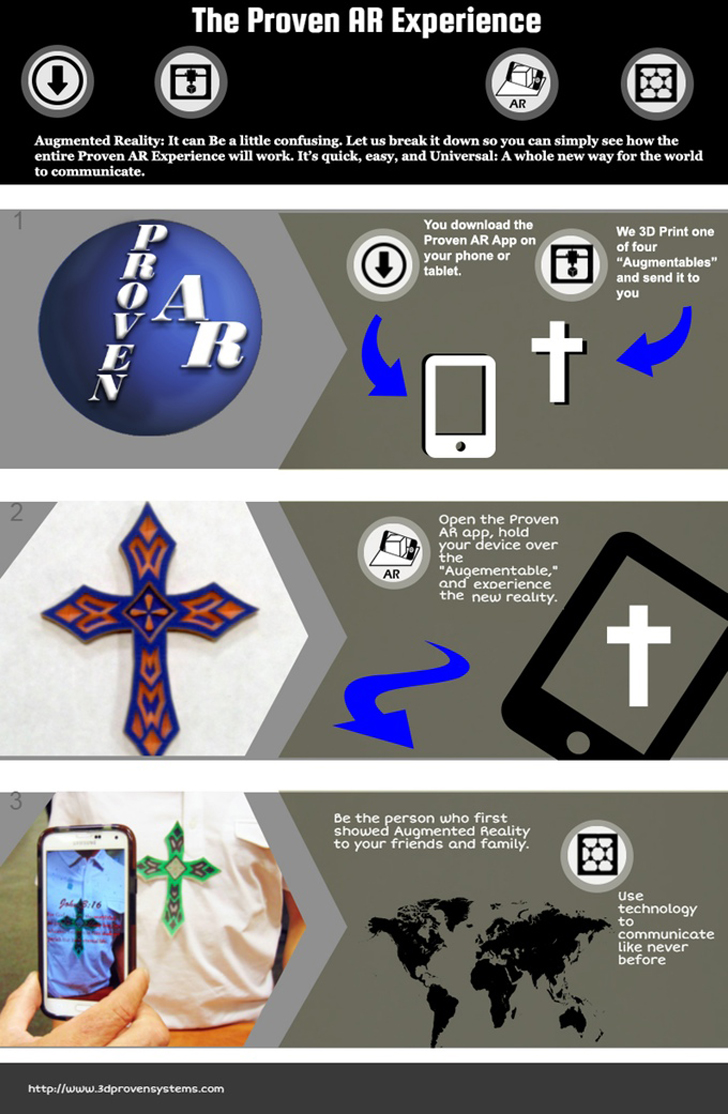 “Proven Reality” is, I believe, the first of it’s a kind – a wholly holy 3D experience that combines 3D printing, virtual reality, augmented reality, and history’s best selling book, The Bible. Proven Reality incorporates the aforementioned headset – with which I was able to obtain a decent VR experience, though there were a lack of iPhone apps designed for VR – with a VR app meant to induce a spiritual experience.  By sliding a smartphone into the Proven Cardboard and opening The Proven One app, users will be able to, according to the campaign, “experience a quiet and powerful moment with Christ in the virtual world as you see and hear his words from the Bible come to life before you.”

While the Proven One Experience can be obtained for a $50 pledge, along with a number of other rewards, 3D Proven Systems has combined its expertise in 3D printing with augmented reality. The company has designed some 3D printable “App-wear Apparel”, including heart-shaped cookie cutters, a peace sign, a lightening bolt, and a crucifix.  With the Proven AR app, users can hold their smartphones over the 3D printed object and a Bible verse will hover over the item on the smartphone screen. 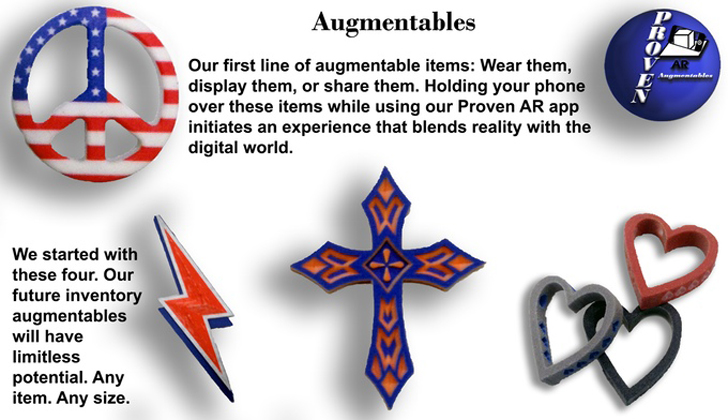 The idea behind Proven Reality is to “creat[e] a new reality to communicate the stories of the Bible like never before,” using new technologies to spread this form of Christianity in ways that have previously been unexplored.  Interestingly, the campaign adds, “we want to make Christ known, and to use 3D technology as the means to do it. Even if that’s not a message you personally connect with, the structure of Proven Reality can be applied to any idea, interest, or message: Creating an array of new realities for any number of purposes.” This implies that the company is also interested in launching Proven Reality as a platform for 3D printing, AR, and VR for any message.

I may not be a religious person, but I can be struck by occasional bouts of spirituality and mysticism and, ever since I was aware of products like Google Glass and the Oculus Rift, I had wished that someone would create something capable of inducing cosmic consciousness in its wearer.  Of course, I’m not the first to have foreseen such an application of futuristic computing devices.

In Philip K. Dick’s Do Android’s Dream of Electric Sheep? (bastardized into the beautiful film Blade Runner), the remnants of Earth’s population that didn’t make it to humanity’s colonies in space, are left communing religiously through a device called Empathy Boxes. The Empathy Box is a sort of VR device on which users place their hands and are all transported into the body of a Christ figure named Wilbur Mercer . Together, they experience the reality of Mercer as he endures endless pain and suffering. The chickenhead John Isidore describes it in this way, “But an empathy box… is the most personal possession you have! It’s an extension of your body; it’s the way you touch other humans, it’s the way you stop being alone.”

Proven Reality is the first iteration of such an app/device, both predicting future technological trends and maintaining cultural traditions, bringing Christianity into the 21st century, as least from a tech standpoint. The porn industry’s adoption of a technology is often cited as a good predictor of that technology’s success – and we have already seen its endorsement of VR and 3D printing; however, with 2.2 billion Christians in the world (16.85% Roman Catholic, followed by 6.15% Protestant, 3.96% Orthodox, and 1.26% Anglican) the religion’s adoption of a tech may be just as useful in determining its success. With evangelism already occupying numerous channels on US cable and, later, YouTube channels, selling DVDs and, even, floppy disks, I would say that Proven Reality is a symbol that VR/AR and 3D printing will be successful technologies.

If you’re looking for a new spiritual experience that may not be obtainable through other forms of worship, Proven Reality might be for you.  Or if you’re just looking for a platform to communicate your own reality, you might consider Proven Reality.  Hm, things are starting to sound like a Philip K. Dick novel already.