Polymaker is no stranger to Kickstarter. Since its first campaign in 2014, the Shanghai-based 3D Printing company has rebranded itself, raised funds and brought to the market some very innovative and exotic filaments. With their new Kickstarter campaign launching on April 25, 2016, the Chinese company expects to solve one of the major issues with extrusion-based 3D printing, namely, the poor surface quality that has been a prominent disadvantage which distinguishes 3D printed parts from parts made by conventional manufacturing methods. To tackle this major drawback, Polymaker is introducing the PolySmoothTM and PolysherTM, a new innovation and desktop machine which will work in tandem.

How does it work?

Simply print your part with the PolySmoothTM on you favorite 3D printer, remove any support structures and place the print into the PolysherTM. The video below shows how easy the process is and how smooth and glossy the part will become. Dr. Xiafan Luo, the President of Polymaker, has a big vision for the new PolySmoothTM and PloysherTM. He is trying to bridge the gap between 3D printing and traditional manufacturing, bringing 3D printing into the realm of making final products, not just prototypes.

According to Polymaker, the core of the technology is their material – PolySmooth™ PVB. This innovative material gives excellent printing characteristics, balanced mechanical properties, and most importantly, can be polished when exposed to common alcohols such as isopropyl alcohol or ethanol. The polishing process take part in the desktop machine the Polysher™. The key component of the Polysher™ is a unit called the nebulizer, which consists of a thin membrane with hundreds of tiny (< 10 microns) holes attached to a piezoelectric actuator. When activated, the nebulizer will generate a fine aerosol of micro-sized alcohol droplets filling up the sealed chamber in the Polysher™. These micron-sized droplets then create a film on the surface of the 3D printed part, smoothen and unite the layers creating a truly glossy surface with no visible layers. There is no heat involved and thanks to the Polysher’s sealed chamber and smart electronic system, the process is safe and consistent each time.
“After a typical polishing process, the surface roughness, as characterized by the mean roughness depth or Rz, can be reduced by about 1 order of magnitude, for example from ~100 um (typical for a part printed at 0.2 mm layer height) to less than 10 um. The difference is visually striking, with the polished part exhibiting a smooth, glossy surface finish with layers no longer visible. ” said Junheng Zhao, Material Scientist at Polymaker. The Polysher™ uses commonly found alcohol, easily obtained in supermarkets, hardware stores or pharmacies. 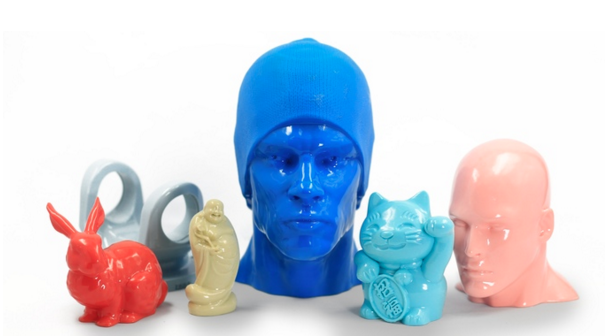 Polymaker has prepared well for its new campaign, teaming up with with Pragmatic Designs, Inc. and Gyre9, LLC, two US-based product development companies to create a sleek design and durable product. It teamed up with Mascon, to manufacture the PolysherTM. Mascon has over 30 years of experience in managing manufacturing, assembly and supply chain.
Polymaker is looking to raise $100,000 from the Kickstarter campaign. Super early bird backers will be able to buy a PolysherTM and a PolysmoothTM for only $199. Expected delivery is September 2016. We wish Polymaker success with their new campaign!