While the 3D design marketplace has been pioneered for quite sometime by services such as Thingiverse and MyMiniFactory, not all 3D printing enthusiasts know how to make the best transition from the design download to the print bed. Standing in between this process is software, which can be difficult to navigate for less experienced 3D printer owners. But one Ireland-based startup, called ThinkR, has just launched an IndieGoGo campaign to help fund their unique twist on the 3D design marketplace world. The group of young entrepreneurs have created modelR, a 3D design marketplace that integrates a streamlined software to ease the actual 3D printing process. 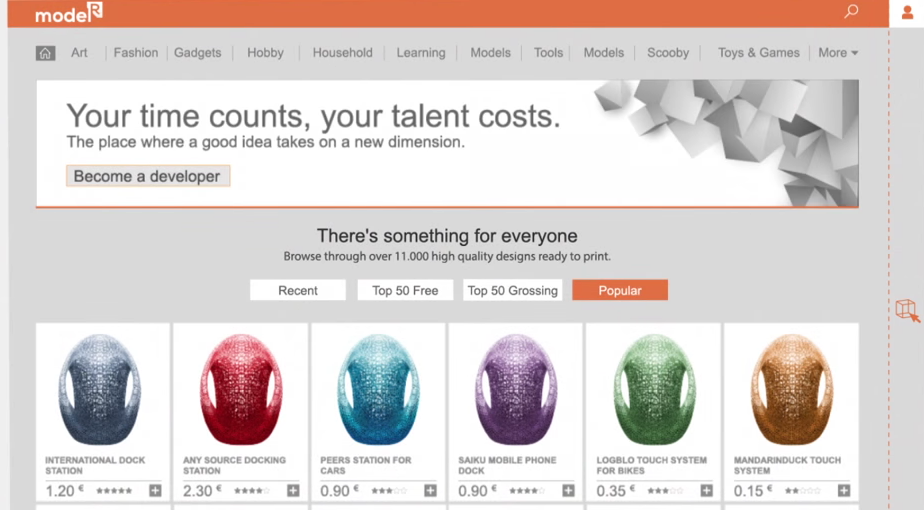 The modelR 3D printing process is geared to help less technical 3D printer users gain better access to printable 3D models. According to ThinkR, the interface of the marketplace will simply allow users to select a design and drag, while the modelR software takes care of the rest of the printing process. Designers will be offered a plan for 10 euros a year, which will give them access to 3D designs, unlimited uploads on the platform, 70% profit on their sales, and advertising space access as well. Users will be able to browse these designs free of charge, and can either find free or priced designs to conveniently 3D print. For those designers who choose to sell their 3D models on the platform, modelR will streamline the process for the user so that they are never in possession of the file.

ThinkR is focused on two competitive advantages that they feel they hold over other 3D marketplaces. The first is their streamlined software, which helps ease the pain of using complex software to prepare the file for printing. The second issue they feel they address is the difficultly that designers have marketing and actually selling their designs. With just the click of a button, the user can have the chosen file up-and-running on their 3D printer without a second thought.

The team claims that, although they have achieved much of the work using their own financial resources, they are asking for crowdfunding assistance to help finalize and push their platform out to the public. For 10 euros, contributors will be rewarded with a two-year Designer subscription, while 50 euros and more will lead to a three-year Designer subscription along with other perks. I think the idea of streamlining a software to less experience 3D marketplace browsers is a great idea, yet it remains to be seen whether or not this young startup can bring their modelR platform up to the level of the industry leaders. Claiming that, “our goal is democratization of 3D printing”, I feel that ThinkR will have to win the hearts of some quality designers to get votes from their potential user base.

Here’s a closer look at the 3D design marketplace platform that ThinkR has to offer the 3D printing community: