A few weeks ago, I was looking around for an easy-to-use mobile phone to give to my grandmother. I immediately thought of the OwnFone, the 3D printed mobile phone which can be customized with single easy-access buttons, and I contacted them to find out – as I imagined – that they were not yet available outside of the domestic UK  market.

That is all changing now, as the company has launched a huge expansion campaign ,which includes a Kickstarter run, an entirely new website, and a new physical shop in Islington. The company is now also opening up to Continental European and North American markets, with a lot of new variants, from 2D decorated phones, to LEGO brick phones, to phones that you can 3D print at home.

Thomas Sunderland, OwnFone’s founder, has immediately put the £786 K he recently received in funding to use and there are actually enough new things going on with the company to write 5 different articles. So, I will try to give a general overview, keeping in mind that the OwnFone started out as a way to use 3D printing technologies to make very simple, accessible, and personalized mobile phones. The idea is that they can be used by children, the elderly and – thanks to the possibility of easily integrating Braille  – by the visually impaired.

Even then, it seemed like a great idea and a potential killer application for 3D printing. Now, with the possibility of 3D printing a phone on a home desktop 3D printer, the project is really shaping up into something potentially huge. To launch all the new phone variants – including the desktop 3D printable one shown in the video below – OwnFone began with a KickStarter campaign.

This will let users pre-order several new OwnFone models, which start from the £66/$100 Wordfone, the first OwnFone (like the ones that can be already be created on the OwnFone website for UK customers) available outside the UK, supplied SIM-free and unlocked to work on any 2G, voice-only, mobile networks. The Braillefone will now also be available outside the UK through KS, and so will the TextureFone, RaisedFone, DotFone models and the FaceFone (with 2D printed photos of your contacts on the keypad) models.

Models also include the DrawFone, which can integrate any 2D drawing into its design, and the EasyFone, with optional 3D printed buttons. Then the list of new models begins. Among the most interesting are the TigerFone, designed with children in mind; the BIoFone, made out of natural materials; and the fully personalized MyFone, which can be named by the user. The HelpFone will leverage the OwnFone’s year long battery life (thanks to minimal energetic requirements) to keep it as a mobile phone to use for emergencies only, and the BrickFone is, well, the first ever functional mobile phone made with LEGO bricks. We then get to the £119 3D PrintFone Starter Kit, which will give users 1 x Seed Handset that can be 3D printed in PLA on any desktop 3D printer. Delivery for all products is scheduled for July 2015. 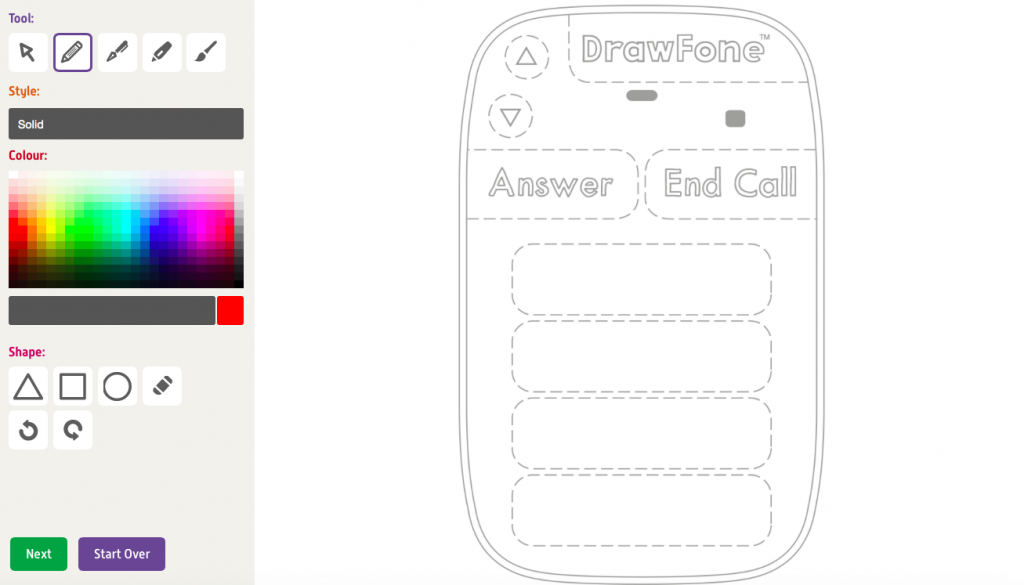 If you live in the UK and want to get a hands on impression of the OwnFone you can now visit their new store in Islington’s Business Design Center (the venue that hosted the 2012 and 2013 3DPritnshow and is open year round with several design shops and studios), or you can visit the new website and start playing with the redesigned OwnFone customization tool. The site is even fun just to play around. Knowing that it can easily become a real product and that soon you will be able to 3D print it at home makes it even more fascinating.