The Cortex cast concept for broken upper limbs presented in mid-2013 by Jake Evill was a demonstrative example of 3D printing’s potential shown to the wider global public. Soon it may also be used as a case study in intellectual property rights as a new design, presented by Denis Karasahin at the A’ Design Award & Competiton, uses a very similar design while taking it one step further by adding ultrasound technology. 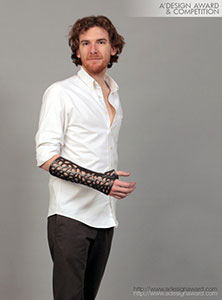 Just like the original Cortex cast, the new Osteoid concept seeks to improve the overall healing experience of broken and fractured limbs by introducing a custom fitted 3D printed medical cast, that is both durable and waterproof. The 3D printed exoskeletal structure is modelled according to the patient’s arm 3D scan data and is based on a voronoi type structure that assures protection while leaving open spaces for ventilation and scratching.

In the Osteoid case the ventilation openings are also used to implement a Low Intensity Pulsed Ultrasound (LIPUS) bones stimulation system, which needs to be applied directly to the skin and could thus not be used in traditional medical casts. Used in a daily 20 minute session, the LIPUS system would reduce healing times by 38% and increase the heal rate up to 80% in non-union fractures. The ultrasound pulse generator can be switched on and off through a button and has a colour switching LED that indicates operational states and session times. 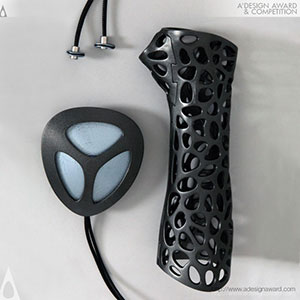 The exact shape and positioning of the locking mechanism is determined algorithmically and added to the final CAD data along with the LUPUS probe adapters. Karasahin’s concept will be 3D printed by FDM, using ABS plastics and a wide variety of colouring options. The cast seen in these photos measures 130x108x315 mm, which means it could be 3D printed easily with a new MakerBot Z18 and a few other large desktop 3D printers.

An issue that may require a more advanced technological solution is the locking mechanism, something that the original Cortex model had taken into consideration but did not explore in full practical details. The locking system is clearly visible in Karasahin’s model but he revealed that it was not easy to develop it to be strong enough to protect the limb, practical enough to put it on the fragile injured area and simple enough so that it wouldn’t disturb the general form of the medical cast.