I have never broken a bone, and slightly regret writing that phrase as if it foreshadows imminent harm, but I have signed a few casts in my time. The smelly bulky plaster that wraps around limbs festering mold and atrophy was taken by Jake Evill as a problem, not a tradition to be left alone. The New Zealand native innovator has embarked on a programme to create exoskeleton casts with 3D printing technology inspired by the spongy latticed form of bone tissue in what appears as a thin honeycomb structure. 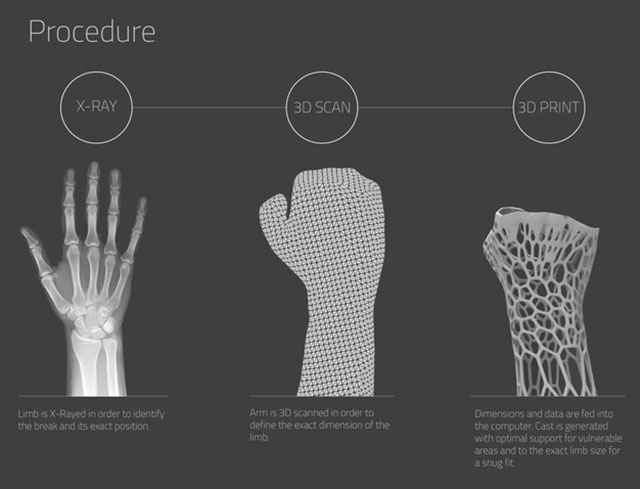 After working with prototypes, the Cortex casting uses a nylon plastic and tends to be no more than 3 millimeters thick and under 500 grams. The simplified procedure follows three steps: X-ray the broken limb, scan the limb for exact dimensions, and feed information into a system to print a snug exoskeleton with optimal support in areas of need. It will have fasteners to click into place. The material and form allows for a waterproof, ventillated, and aesthetically pleasing membrane of a cast. The honeycomb form is more concentrated around areas in need of more support and it can fit under a long-sleeved shirt. While this kind of cast would not permit scribbles of endearment and support, it does look more like a cast befitting today’s assortment of superheroes (if bare) and discreet bone setting if needed. The initial cost still exceeds traditional casting, but like any innovation, the first hurdle will be the most daunting, the rest will be a matter of practiced form.