One Click Printing for All: An Interview With Skriware

From a small dream to an insanely successful Kickstarter campaign to your very own living room, Polish-Swedish 3D printing innovator Skriware is quickly making an inspiring leap from startup to industry leader. Understanding that 3D printing is a rapidly growing market that all people – from tech wizards to novice hobbyists – want to get their hands on, the team behind Skriware sought out to tackle this issue with one thing in mind: accessibility. Available for presale for an impressive $799 (£545), each Skriware printer features wifi connectivity, a full color LCD touchscreen, a removable magnetic bed, a print area measuring over 178 sq. in. and a host of other attributes designed for easy use.

As the company prepares to take the next step toward distribution and growth, they are looking forward to what their customers will eventually create with their printers. Before the company’s imminent take off, however, 3D Printing Industry got a chance to sit down with Skriware’s General Manager, Gerald Tomasik, to talk a bit about the company’s goals, philosophy and most importantly, their products. 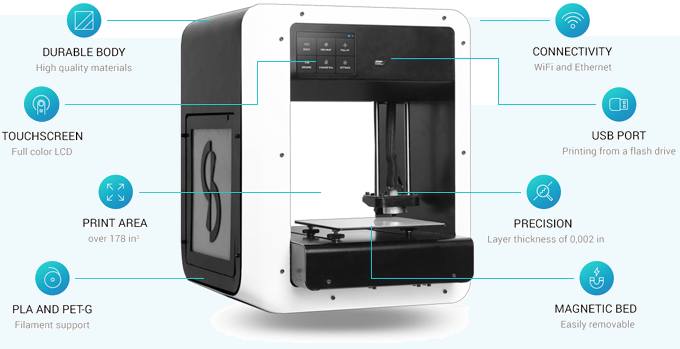 Starting with a kick

A veteran in the field of new technologies, Tomasik found himself connecting with the team at Skriware over three years ago when he went curiously searching for more information about 3D printing. After attending a few industry seminars and events, Tomasik committed himself to the Skriware team, helping them towards their goal of “one click printing.”

The company was initially funded through a Kickstarter campaign, which gave them “an incredible boost and knowledge,” says Tomasik. “We’ve learned a lot about our customers’ needs and the product itself­,” Tomasik added. Starting from Kickstarter with an active audience allowed developers to directly see “which features of the printer are most desired, what should [be added] to Skrimarket and so on.” Tomasik also credits Kickstarter for giving Skriware increased exposure on social media and in the public, which wouldn’t have been possible on other platforms.

Catering to the novices

Aside from giving Skriware a platform on which to promote their product, Tomasik believes that media outlets also helped to propel public demand for commercially available 3D printing products and services. “People began to appreciate 3D printing and the possibilities of creating custom products on their own,” says Tomasik. This increased appreciation for technologies led to an influx of new users, to whom Skriware hopes to cater, exclusively.

With the increasing popularity of 3D printing technology, Skriware’s user-friendly interface joins the likes of many other sites dedicated to bringing it to the public. My Mini Factory, for example, offers similar printing services from a wide user base. But Skriware stands out in its devotion to “break[ing] down existing barriers in the use of 3D technology.” Their integrative processes “requires no modeling skills, no hardware adjustments or dedicated computer software, or any expert knowledge whatsoever,” allowing users to create amazing 3D printed products regardless of their status in the field. The experts at Skriware were inspired to create a more accessible route into the 3D printing world after realizing that the technology had potential in many fields, but was only attainable by professionals. Tomasik says the company hopes to create the kind of product that a parent without much industry knowledge could use to teach their children in new, creative ways right at home.

A new kind of printer

“It took us two years of hard work to develop Skriware printer and Skrimarket. During that time we used Scrum framework within Agile development methodology which helped us to organize our workflow and conduct UX tests. This way turned out to be just the right one for us. The main goal was of course to deliver a product fit for every user and we did it,” says Tomasik of the team’s development process. The Skriware printer also uses its own firmware and has many exclusive features designed for easy access. Above all, the Skriware printer features a unique minimalist exterior and is available in a variety of colors, ensuring that the product fits with the interior of any home perfectly. Right now, the printer is available on the Skriware website at a discounted price, and each printer comes with a free spool of filament and free $100 Skrimarket gift card.

Products for the people

Along with the incredibly easy-to-use printer, customers will also have access to the accompanying marketplace, Skrimarket. “Our platform offers items such as toys, decorations, game figurines, tools holders, phone cases or even jewelry. The market has only just been launched, but the number of new models is growing fast every week,” says Tomasik. As a soon-to-be-father Tomasik says his favorite product on the site right now is the convenient anti-baby socket protector, designed to keep babies and toddlers safe around electric wall outlets. For those of us who prefer to take care of Pokemon or plants instead of children, however, Skrimarket also offers a cool 3D printed Balbasaur plant pot!

As another way to ensure users from all areas can appreciate and interact with their products, Skriware has launched a contest for 3D printing enthusiasts to develop their own models. Participants can show their best designs to a wide audience and are judged by industry experts based on their products’ usability, quality, ingenuity and popularity. Winners will be selected every week and month, for a chance to win a spool of filament and a Skriware printer, respectively. Upon winning, designers will be able to upload their products onto the platform and start earning from their designs instantly. The contest ends September 30, 2016.

Already making negotiations for international sales around Europe, the Skriware team is working hard to take their product as far as it will go. They hope to add even more products and features to Skrimarket in the near feature. In the mean time, the Skriware printer is projected to be available for shipping by the end of August. Stay tuned for all the big things that are sure to come from Skriware in the future!