On the Sphere & the Cylinder — 3D Printing Mathematical Proofs

Archimedes, the ancient Greek mathematician famous for creating numerous inventions, laying the foundations for calculus and for determining the areas and volumes of just about everything, has been resurrected with the help of to two Harvard mathematicians and a 3D printer. In order to pay homage to the great thinker, Elizabeth Slavkovsky and Oliver Knill took some of his most notable mathematical proofs and ideas and printed them in 3D. 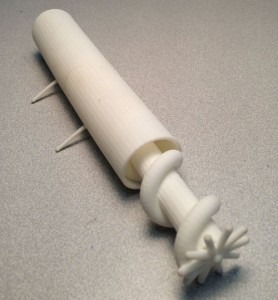 Of these proofs is Archimedes personal favorite, which illustrates that the volume of a sphere is ⅔ the volume of a cylinder with the same height and diameter and that the same is true for the surface areas of both shapes.  This insight was so important to the philosopher that he had his tomb marked with a sphere circumscribed by a cylinder.  Slavkovsky and Knill, thus, found it appropriate to replicate the relationship in 3D, printing a model with a half-sphere placed on the top of a cylinder, creating an object they call “The Drinkable Proof”.  As water is poured through the top of the sculpture, it fills exactly ⅓ of the cylinder (the volume of ½ a sphere).

Pictured above is a 3D printed model of the famous Archimedes screw. The inventor was commissioned by King Hiero II to find a way to keep his ancient Greek luxury cruiser, the Syracruisia, afloat, despite its huge mass.  Wikipedia describes the story of the innovation this way, “The Syracusia is said to have been the largest ship built in classical antiquity. According to Athenaeus, it was capable of carrying 600 people and included garden decorations, a gymnasium and a temple dedicated to the goddess Aphrodite among its facilities. Since a ship of this size would leak a considerable amount of water through the hull, the Archimedes screw was purportedly developed in order to remove the bilge water.” 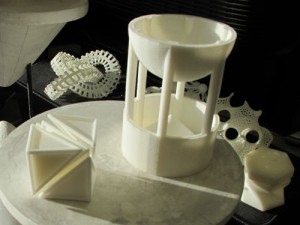 Slavkovsky believes that such 3D printed models might vastly improve mathematics education by providing tangible examples of mathematical principles and complex shapes. Digital models and hand drawings provide some insight into geometry, but being able to hold and feel the shapes bring these otherwise abstract ideas into the world of the real, making the concepts taught in high-level math more relevant to everyday life.

If you’re interested in trying to print The Drinkable Proof yourself, you can find the instructions mathematics to do so in a program called Mathematica here.