After Nokia released 3D printable files for the Lumia 820 phone model, I wonder if they were expecting (or just hoping for) the furore that has ensued? The initial announcement got a healthy enough response, generally excited. This was quickly followed by a couple of the 3D printing services posting on the subject, having downloaded the available files and printed them out. i.materialise notably issued warnings with its “myth busting” post, has today issued further updates, with the promise of more to come; and Sculpteo, with it’s own phone case app, was more upbeat. You can read my thoughts on these posts here.

Well, 3D Systems, not to be outdone, has come up with its own response.

Backing Nokia’s move towards customization and 3D printing, Cubify has taken Nokia’s STL file and using its new tool — Appcreate –  has created a program intended for modellers who make awesome files but have no programming experience and developed an app with fun add-ons. The app is free to use and generates a free STL for users to print at home. But of course, if you don’t have your own 3D printer, you can get it printed via Cubify! 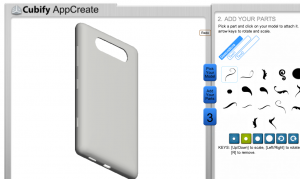 Cubify does stress however, that this app is for personal use only.