When Olympic Champion Shelly-Ann Fraser-Pryce takes to the track in Rio de Janeiro for the women’s 100m preliminaries on August 12th, she will wear a groundbreaking running shoe from Nike that owes a lot to 3D printing.

The sportswear giant claims that the Zoom Superfly Elite shoe that the Jamaican icon and winner of the last two Olympic 100m crowns will take into battle is one of the most advanced ever. Fraser-Pryce worked with Nike’s development team for years to create the perfect profile of her 100m dash and tailor the shoes she will use to go for gold.

Felix beat her to this one

American sprinter Allyson Felix also worked with Nike to create her own Superfly Elite and this is clearly an ongoing process. The perfect plate depends on the athlete and 3D printing is taking us away from a one-size fits all approach and allowing the likes of Nike’s supported athletes to produce their absolute best.

Sprint races at the Olympic Games can be decided by thousandths of a second. So the work that has gone into these shoes could make the difference between victory and defeat for Fraser-Pryce. That’s why Nike has invested in 3D printing more than 20 different spike plates to help her get the best possible start and extract as much speed as possible from each stride.

After intensive testing, Nike decided to ditch the traditional screw-in spikes that can be replaced individually and opted for a series of fixed pins. The actual finished plate is not 3D printed, but additive manufacturing helped them test a vast number of possibilities and settle on the best design. 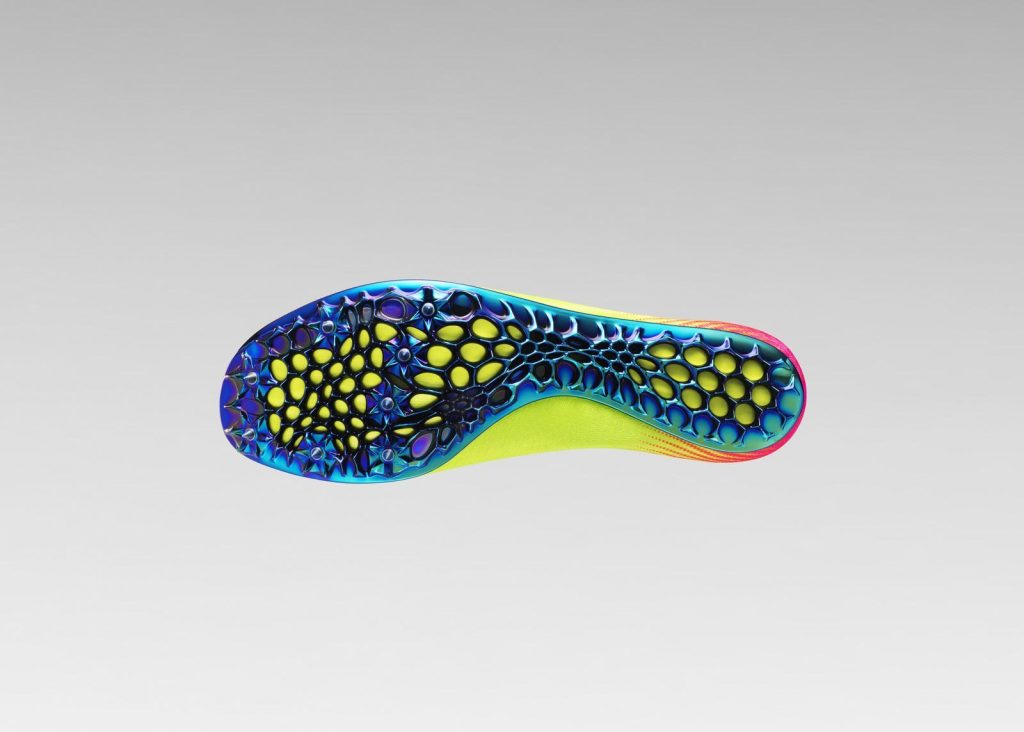 How do they bounce?

Nike’s innovation design director Shane Kohatsu wanted to optimise how the plates bounced off the surface of the track. The perfect plate is a complicated compromise. It has to provide the right amount of support, withstand the repeated impacts and it has to be lightweight.

“For us right now, 3D printing is all about accelerating the project, the innovation process,” he said. Nike has taken the same approach with American football cleats and has worked hard with a number of pole vaulters that have their own specific demands for a shoe. The Nike Zoom PV III is the end result.

“We’ll 3D-print to have something for them to have in their hand,” he said. “If the scale is correct, they can put it on and walk around in it, but they’re not going to go pole-vault in it. We don’t do any of that.”

Nike has adopted a relatively conservative approach to 3D printing and Kohatsu claims it is not quite the ‘easy bake oven’, that some people believe. Others have gone much further.

Other manufacturers are more into the concept

Adidas recently unveiled Futurecraft 3D, a lightweight running shoe that allows the foot to breathe. New Balance and Under Armour are now selling shoes with 3D printed soles to the general public.

3D printing has played a substantial part in the Olympic Games and will also feature in the Paralympic Games that follow thanks to BMW’s creative consultancy printing wheelchairs for the US team and a German cyclist using a 3D printed prosthetic leg. The rapid prototyping aspect of 3D printing means it’s a powerful ally for athletes looking for the nth degree of performance. So the only real surprise is that it hasn’t been used more.

We expect that to change.