One of the most impactful and influential photographs ever taken, Steve McCurry’s iconic ‘Afghan Girl’, helped to portray a relatively unknown culture to the entire world, in turn making the ‘Afghan Girl’ the unofficial mascot for refugees displaced and affected by the conflict between the Soviet Union and Afghanistan. Originally released on the cover of one of National Geographic’s 1984 magazines, the picture is internationally recognized and still is packed with almost as much impact as it was when it was first released. The Afghan Girl, whose actual name is Sarbat Gula, has since had a documentary made about her life and has been photographed again by McCurry in 2002, but, for the first time, Gula’s influential face is being transposed into a 3D print by 3D printer store and service providers 3Durak. 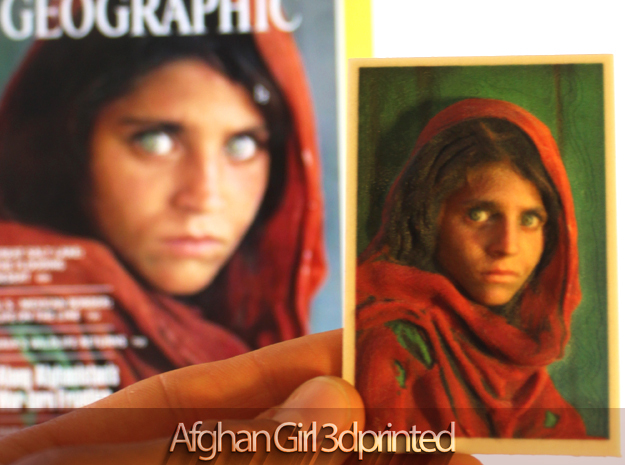 Turkish-based 3Durak’s mission is to make the world a more innovative and imaginative place through 3D printing services. They specialize in training for various 3D printers, offer high-quality 3D scanners, and take-on projects much like that of the “Afghan Girl”. The project was modeled by Turkish designer Erçin Gündüz, who has numerous other projects ranging from the Grumpy Cat Buddha to his Pixel Click Pendant, but the 3D photo of the famous Sarbat Gula is probably the most serious and influential of his mostly light-hearted projects.  The 3D photo of Gula is modeled and printed in full-color sandstone, which gives the finished project a coarse finish and a delicate touch. Printed on 3Durak’s ProJet 600Pro in its Istanbul-based 3D Printer Store, the sandstone is colored during the process by a set of CMYK printheads, which color each individual part of the material while it is still binding together into a solid object. 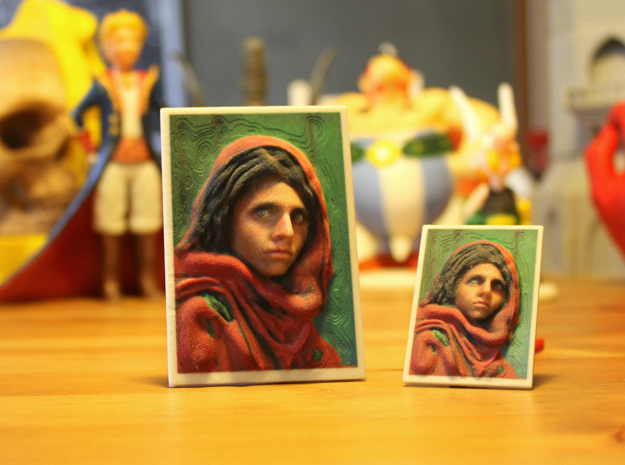 Gula is now 43 years old, and her face is still well-recognized across the world thanks to her 1984 National Geographic cover photo. 3Durak hopes to make Gula aware of their 3D photo of her famous image, and eventually wants the 3D photo to reach the surface of yet another National Geographic cover, giving attention to both Gula’s struggle and the new projects and ideas that are being manifested through the industry of 3D printing. The 3D photo can be purchased on Gündüz’s Shapeway’s shop for $22.00, offering to us a historical moment through the innovative, new medium of 3D printing.