One fateful day, while Maker Andreas Hölldorfer was stress-testing his home-built 3D printer with a freshly printed lattice tower, he noticed a beautifully scattered light that was created by the shapes within the tower’s structure. And so, what started as a simple stress test ultimately led to the creation of the Starlight, Hölldorfer’s 3D printed modular lamp, including RBG LED modules that make for quite the light show. After accidentally stumbling upon this aesthetically pleasing scattering of light, Hölldorfer expanded on the design of his lattice tower and implemented 3D printed joints to connect the entire modular lamp together. 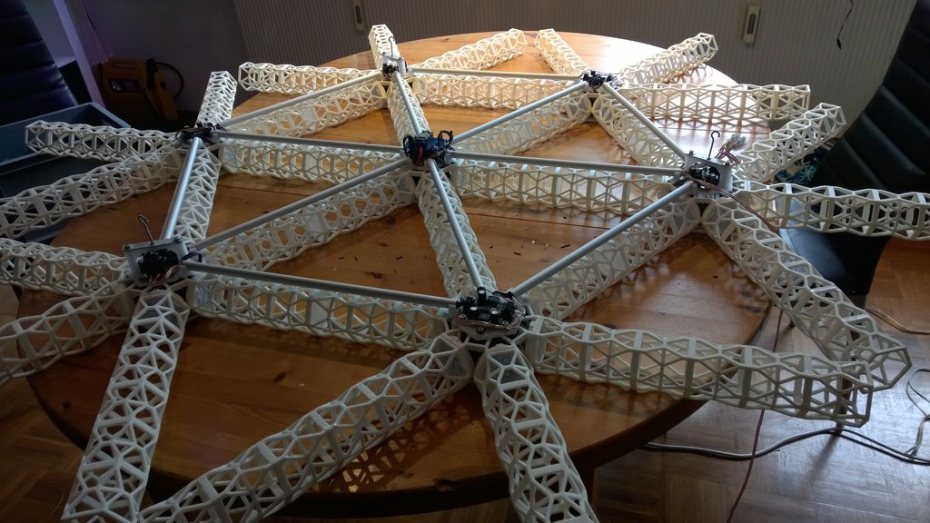 The StarLight’s 3D printed body was designed so that the RBG LED discs snap right into place, all of which are compatible with adafruit’s NeoPixel controller. The color of each light can be selected via OpenHAB, an open source automation software used by Hölldorfer, while each single node is controlled through an ESP8266 Wifi module board. This allows Hölldorfer and Makers who follow in the footsteps of his StarLight lamp to alter the color of each LED light through a WiFi-connected tablet; this way, the light show can be performed hands and stress free. Once the six LED discs are snapped into the 3D printed joint, Hölldorfer installs a tower on top of each one, allowing the LED lights to scatter up through each lattice tower in the same fashion that originally inspired him to complete this project.

By the time Hölldorfer scaled up the modular lamp to greater size, he was able to connect a seven node system into the 3D printed towers. At the bottom of each connecting joint, he also installed a large 15 watt white LED light, which provides the multi-colored lights surrounding it with more luminosity and presence. The entire process of putting the modular lamp together is discussed by Hölldorfer in great detail in the video below!

In the spirit of a true Maker, Hölldorfer is providing the .stl files and demo sketches for the StarLight modular lamp on Thingiverse, allowing anyone access to replicate or redesign his colorful 3D printed light fixture. You can keep up-to-date with Hölldorfer and his other 3D printing projects on his blog, where he innovates more with 3D printing and also hacks LED controllers. What started as a simple stress test for his homemade 3D printer had suddenly turned into a light show that would leave almost anyone in awe. The shapes within the 3D printed tower help the light spread beautifully, while the WiFi controlled LED’s help engage us and keep the colors in constant flux. All in all, this is a great, step-by-step project for anyone looking to dip their feet into the world of a Maker; Hölldorfer provides you with every step, and the final product is sure to lighten up your day!