Is the Nat.Net 3D Molecular Printer a Real Thing?

Have you heard of Nat.Net? It seems like you probably should have – or, at least, I should have – by now. This is because Nat.Net is a company that claims to have reached the Holy Grail of 3D printing. They claim to be able to print anything, at all, ever, pretty much.  But, they are extremely vague about it. So, when they perform their big unveiling at the Frontiers of Interaction Conference (at the unique, Frank Gehry-esque MiCo building) in Milan, hopefully they become a little less vague about it or else they’ve got some ‘splainin’ to do.  Until then, and we will follow up, we will have to decipher their promotional materials and an e-mail they sent to 3DPI.  Here’s a video from their website:

Join the Nat.Net Beta Community from Nat Net on Vimeo.

The premise is that, using a 3D molecular printer, you will be able to input all of the right chemical elements and get out whatever you want. This seems to be the idea that lies at the heart of all of the 3D printing hype, possible and impossible at the same time. Possible in that it is logically possible, given the right know-how and technology. Impossible in that, as far as I know, we currently lack the right know-how and technology.  According to a message we received from one of their team members, they’re well on their way to accomplishing this feat: 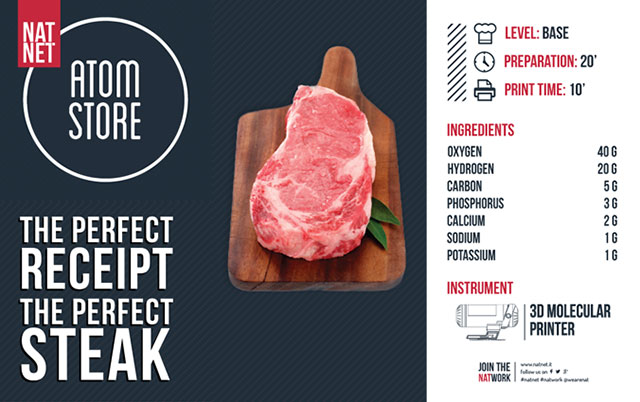 We use a new technology able to print objects combining pure chemical elements. Our system of recipes allow us to generate a list with all the elements needed to print the desired object.

In this way, everything becomes a digital file entirely open-source.

Our system grants you the possibility to manage molecules to reassemble them during the printing process, to obtain the shapes and the features desired. Organic or inorganic, it’s up to you.

Alessio Laschi and Andrea Terzi met at NANOCON 2011 in Brno and since then worked to bring 3Dprint to a higher level. They found other great people who joined the project, and together we develop a software, thanks to the team’s know-how about maker’s world and nanotechnology, capable of creating and managing these new kind of recipes but also a network ready to work following the logics of freesoftware and p2p.

We think this is the right way to share knowledge today. To cooperate between science and design to generate solid work-models for the future.

I tried to contact them for more detailed information, but haven’t heard back yet. If their unveiling puts some proof in the pudding, you’ll bet that you’ll hear A LOT more about it. For now, all we have is some clever marketing, such as their Thingiverse page, where the group has uploaded the .stl for a pear, as well as a file with a previously unheard of format called .3dnp, which I think probably stands for “3D nanoparticle”.  The description underneath their pear is this: “First model that we design as a Network in this BETA Period. In order to add the organic material, you need this 3dnp file for your molecular printer: http://www.natnet.it/pear_natnet.3dnp“ 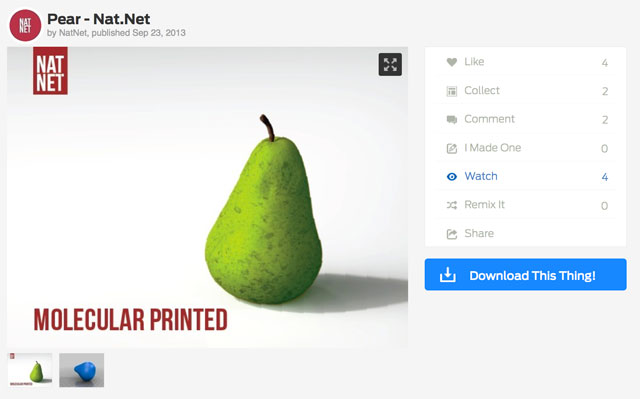 Do they have the know-how and the tech to pull off the impossible? The cynic in me says that it’s unlikely and part of an ad campaign to seek funding to establish a Modern Meadows type company, but the kid in me is holding out for a device that would completely alter the world as we know it. If it’s real, one Thingiverse user who commented on the Nat.Net pear could have his dreams come true: