The Multiple Applications of 3D Printing: Between Maker Movements and the Future of Manufacturing

3D printing will have a profound effect on the world we live in and it could well have a huge impact at the polar opposite ends of production.

The biggest companies will find a way to incorporate additive manufacturing on a grand scale to reap the rewards of efficiency. At the other end, communities will find a way to exploit, hack and collaborate with 3D printers in innovative ways to get the best results from basic equipment and serve humanity.

But how will that happen and what is the end game?

At the commercial end of the scale, there is substantial debate as to whether the production should occur on a local level, which will decimate the logistics industry. or whether we will have even more concentrated production facilities and keep logistics roughly as they are.

Mass production turned into a global concern in the wake of World War II thanks to cheap oil, which reduced transport prices, lower labour prices in the developing world and the intrinsic savings to be made in mass production in far flung corners of the globe.

Despite the talk, though, it is happening at a glacial rate. UPS has finally invested in 3D printing, but the big move to local production has yet to happen. No technology exists in a vacuum, either. The factories themselves are getting smarter, leaner and more efficient thanks to Cyber Physical Systems and other developments.

Decentralization will happen, but to what extent?

3D printing will inevitably form an essential part of the production process and decentralized manufacturing has to play its part. That could turn out to be a more bespoke form of manufacturing on a smaller scale, though, with mass manufacturing following a traditional route.

Additive manufacturing removes the concept of economies of scale, right now, but that could change in the future. To move to a decentralised production process we’ll have to change the politics of the supply chain, too, and even brands could lose their cache. This will create issues that manufacturing as a whole may struggle to overcome.

Mass customisation is almost a given, it’s going to happen. There is no guarantee, though, that 3D printing will be allowed to take over the whole production process. If it does, it is far from assured that it will happen on a local level. The potential is there to reindustrialize Western Europe and America, but that is all we have right now. 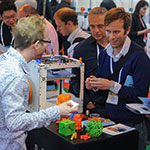 The view from the bottom

At the bottom end of the scale, Fab Labs, or shared ownership schemes, will provide keen hobbyists and small businesses with the means to provide 3D printing services to the local communities. This is true decentralized manufacturing, but it may not occur on a grand scale. They could be much more relevant in developing countries, though, where the low costs and community spirit of the local hackers could achieve a great deal of good with 3D printers.

With open source hardware solutions and the support of big business in terms of designs, these Fab Labs could become social projects that provide poorer communities with products and services they simply could not get any other way.

Printing at home? Hold your horses…

There’s a long way to go before we get to the point where we’re printing goods at home, which was the Utopian vision not so long ago. Now the initial excitement of 3D printing has started to die down then reality has bitten. We’re starting to see that there are issues that go beyond the simple technical problems and that we may be a long way off fully decentralized manufacturing.

The disparity in the approach of the business-minded commercial sector and the collaborative and altruistic nature of the bottom-up community are interesting. Indeed, both might have to learn lessons from the other if we are to overcome the very real political hurdles in the path of the industry.

The commercial sector may well have to move to a concept of downloaded plans and the local community might have to accept that only a commercial level of equipment can provide a number of products. The end result of manufacturing, then, is far from clear cut and could end up somewhere between what we currently think of as commercial and amateur enterprises.

Only time will tell.