MixeeLabs, the online app that brought you customizable cufflinks and Mixee Me figurines, has launched a new Creator for your 3D-printed needs: the Snap Wallet.

This latest Creator, designed by Shapeways user nxt3d, is a money-clip-meets-wallet that comes out of the 3D printer as a single, fully-functional piece.  So, you choose your design on the Mixee Labs site, using either the supplied artwork made by high-concept, interactive artist Bona Kim or your own uploaded art, and select your material color. Then, MixeeLabs will ship you your own customized wallet from their production partner, Shapeways. And when it gets to you, you can slip your credit cards, etc. right and click it shut with a slick snap.  Here’s what mine would look like: 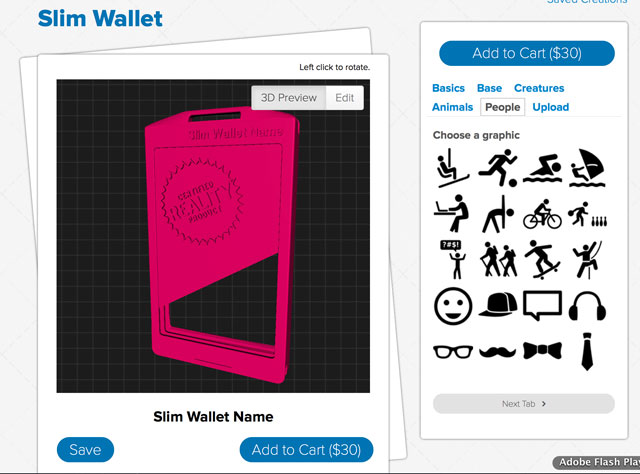 And here’s what it would look like snapping shut:

And this is a video of the wallet being emptied and filled, to demonstrate its two-sided nature:

It’s a pretty neat product for this ever highly customizable world.  Especially when you’ve got to carry around a bunch of cards in addition to your smartphone. What’s more interesting than this product release, however, is that, since we last covered them, MixeeLabs has launched its new Blender Apps platform for creating your own Creator[1].  So, if you don’t know javascript and can’t program a customizable 3D-printed product app, there’s still hope.  You can now design a 3D object and upload it to Mixee Labs, where you’ll be able to set parameters, such as size and color. Check out the tutorial below:

The MixeeLabs team warns that this app developer is still in “super-beta”, but it’s definitely promising.  They’re also advertising a couple of app developers that are in the works: Engrave and Emboss App, which will let developers upload objects on which customers can engrave and emboss text and pictures, and a Mix and Match App, where developers can upload items with interchangeable pieces like Mr. Potato Head.

Unfortunately for MixeeLabs, Makerbot is also developing along a similar path with their Customizer App, with which you can modify existing Thingiverse items by tweaking parameters in a way that’s very similar to MixeeLabs own Creators.  In order for MixeeLabs to compete with Thingiverse, now owned by industry leader Stratasys, they may need to start allowing users to download the 3D object files themselves, though this could hinder their relationship with Shapeways.

[1] If you’re an existentialist-Taoist-Buddhist, you may be uninterested in this feature, as you’ve probably already learned to create your own Creator.