One prediction that has been made since HP first announced that it was interested in the 3D printing space more than two years ago is that other 2D printer manufacturers would soon jump on board.  Other than HP, however, other 2D printer companies have been less aggressive about the third dimension, with Epson working on a five-year industrial 3D printing plan and Brother “just looking” into the technology.  One Japanese printer manufacturer, Mimaki, has been working in the realm of specialty printing for some time and has just now announced the development of a new color 3D printer. 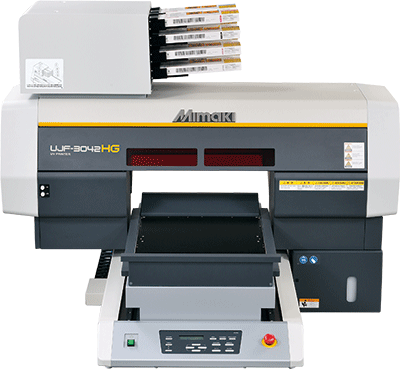 Mimaki Japan chairman Akira Iked suggested that they’ve been working on a type of 3D printing since 2011.  Their UJF-3042 printer is capable of using UV light to print onto 3D objects.  The chairman seemed to incline that the technology could be used to 3D print objects and that Mimaki would be testing the market in the coming months by running a printing service. It was Mimaki president Hisayuki Kobayashi’s comments at the company’s anniversary this week that really raised eyebrows.

Kobayashi explained that they were in the process of developing a full-color 3D printer using four-color UV curable inks to print up to 10 million different colors, “We will be able to produce your products even if you order twice as much as you do now. We commit to invest over 7% of our annual turnover. We want to understand the demands of the market. We don’t just need the printer, we need to develop software too. We need to collect information to build the know-how to develop it. We haven’t decided on the application yet. At this stage we’re focusing on developing a full-color 3D printer. There is a big market. One application is architectural models or medical models, such as a full color heart. We think we can do that within two years.”

The news was announced along with Mimaki’s unveiling of a 84,000sqm facility in Tokyo, which sees the company double the size of its production factory.  Mimaki also hinted at the launch of a new product at the end of the year, but did not yet elaborate on the specifics.  Will the Japanese company become a big player in the 3D printing space? If so, they will still have a lot of catching up to do to compete with the portfolios of industry leaders Stratasys and 3D Systems or the clout of HP.