Earlier this year, 3DPI reported on the Bits to Its 3D Printing Art Show that selected artwork from around the world to display in the Landing Gallery in Rockford, Maine. The show was the result of a contest meant to demonstrate the range of beautiful and complex shapes that could be created with 3D printing. And, while he did not place first in the contest, Henry Segerman proved to be a talented runner up because, since the contest, he has worked with artist Marco Mahler to create an impressive collection of 3D-printed mobiles.

The duo is yet another example of an international collaboration that could only be made possible by the Internet and 3D printers. Marco, a sculptor with an emphasis on mobiles based in Portland, Oregon, and Henry Segerman, a research fellow in the Department of Mathematics and Statistics at the University of Melbourne, met via Twitter and worked together to create the series of mobiles, most of which were generated using complex mathematical formulae.

With a single glimpse at the mobiles, you can tell that these sculptures had to be created with a 3D printer.  As the team points out on Mahler’s website, “Some of the mobiles, like Mobile 4.2, are designed with a very small increase or decrease in thickness from one part to the next, something that is not possible to do with conventional handmade mobiles. Utilizing scripts also allows for designs that would be very time consuming to make by hand, such as the Quaternary Tree (Level 6), which has 1365 pieces.” The most amazing fact about the collection is that every intricate mobile was printed in one single piece.

If you’re interested in owning one of these fine art pieces, visit their store at Shapeways or via their website. But be sure to heed their warning, which I’ve taken liberty with and paraphrased in my own words below:

WARNING: These mobiles are for grown-up kids only. So, before you get any ideas about hanging them up for your baby to stare at while it drifts away into the collective unconscious, remember that these are for decorative use only and the mobiles’ delicate parts could be a choking hazard to small infants that don’t know what they’re doing. 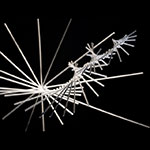