During my journey through Holland (what a hospitable and advanced country by the way, no wonder consumer 3D printing comes from here) I got to visit top notch Fab Labs, booming consumer 3D printer manufacturers, magical 3D print shops, a 3D printed house (or actually parts of a house) and even a 3D bioprinting facility. From every single one of these places I left more convinced that one specific aspect will determine how fast and how much all these companies and projects will develop and expand — materials.

In the more traditional additive manufacturing industry it is a well known — and discussed — issue; but looking at possibile future developments of 3D printing (i.e. consumer and bioengineering) it becomes even clearer. So my last visit in Holland was to one of the brands at the center of this new 3D printing world. That is colorFabb and it was created by Ruud Rouleaux in early 2013, as a spin-off to his Helian-Polymers trading company. The HQ is in Venlo, a beautiful and welcoming small town near the border with Germany. 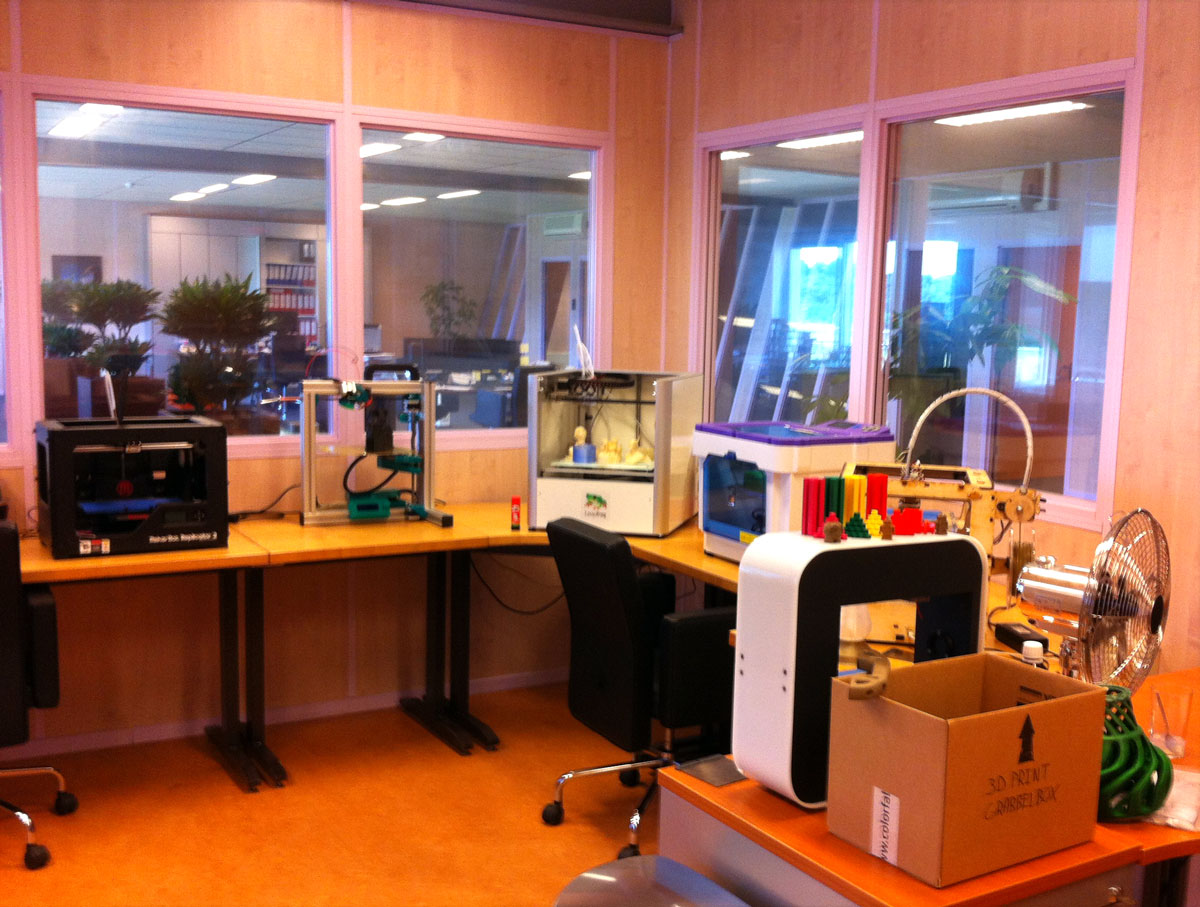 Its recent history is similar to that of many other young 3D printing companies. What began as an idea soon turned into an unstoppable avalanche, with booming demand. In a few short months the colorFabb brand has become the main focus of the parent company, and the entire operation moved into a much larger space, with new production lines and an expanding team.

I meet with Sander Strijbos, who has been with colorFabb from the beginning. He follows the sales and marketing activities and – as you might imagine – he is extremely busy. Nevertheless he took the time to pick me up at Venlo Station and to tell me a little about colorFabb’s recent accomplishments and future projects. 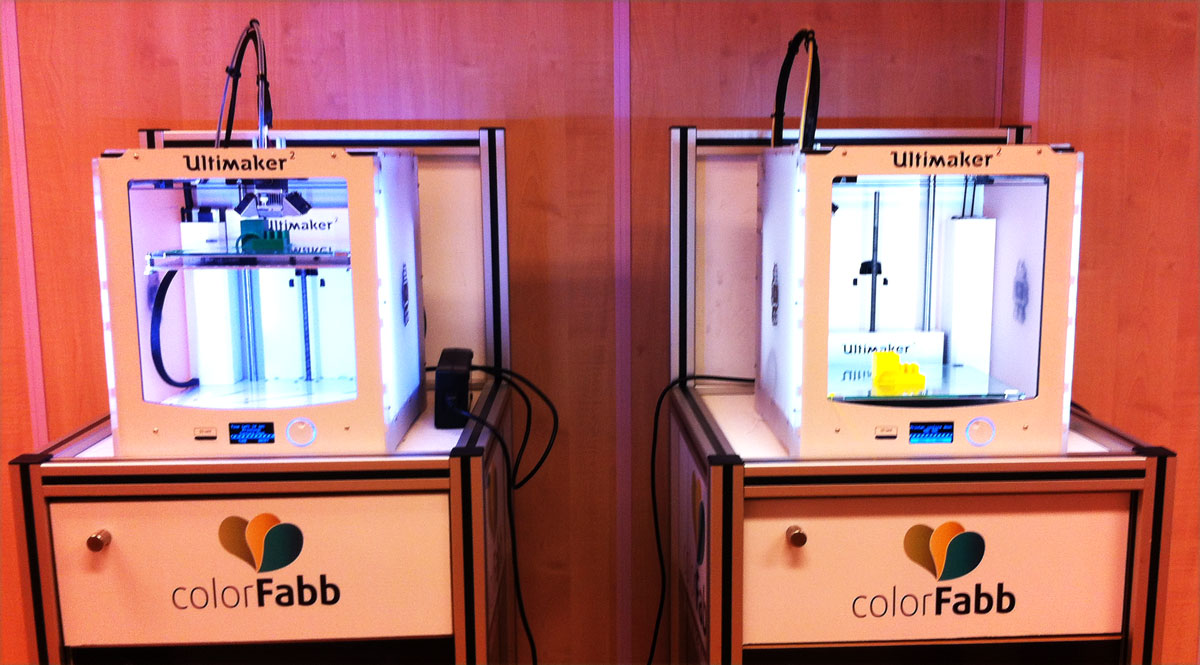 Before we sit down, I get a chance to visit the testing department, filled with 3D printers covering the entire scope of desktop 3D printing with the likes of Leapfrog’s Creatr, Ultimaker 2 and Ultimaker Original (we are in Holland), a BeeVeryCreative, a Replicator 2, a RepRap, a basic commercial 3D printer and one very large Delta. I am impressed by the quality of the prints I see all around me and I realize, once again, that materials do make a difference. What really impresses me though is a piece printed using the new bronzeFill filament that ColorFabb presented at the latest FabCon in Erfurt last May. It does not look like thermoplastic, it really resembles actual bronze. It feels like bronze and, perhaps more impressively, it weighs like bronze.

“We develop everything in house”, Sander tells me. “Ruud [Rouleaux] is the materials expert. He comes up with innovative ideas and we try to get them into production. He also has great expertise in coloring”. Sander joined the company in January 2013 and shortly thereafter colorFabb launched its very first product. “From that point it has been like a roller coaster ride,” Sander says. “Just last summer we were impressed by the business volume and now we have tripled that.” 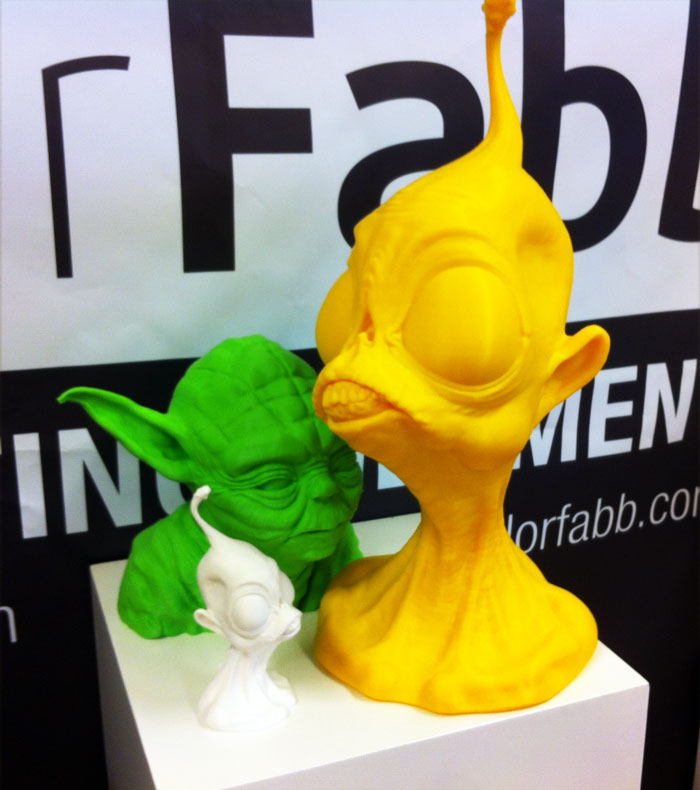 To cater to and feed this booming demand the colorFabb team, which also includes industrial designer Gijs Houdijk, spent the best part of the past year rethinking every aspect of the business. “We designed everything anew”, Sander says, indicating the piles of shrink wrapped boxes and the entire office. “We noticed we were too small for the current location so we moved here two and a half months ago. That’s how long it took to make the decision and have the production lines up and running.”

Along with the woodFill (launched at last year’s 3D Printshow in London) and the bronzeFill, colorFabb’s top product is the XT, a copolymer that offers the same versatility as PLA though is significantly stronger, with a 20 degrees higher glass temperature. ColorFabb has a lot in store for XT and much of it will be announced in details at this year’s London 3D Printshow.

What Sander can tell me at this point is that, throughout a new very important partnership with one of their raw materials suppliers, they are going to develop a wide range of XT colours (currently it is only available as transparent), while focusing on a rapidly expanding range of possible uses.

ColorFabb’s materials are generally more expensive than the generic ones found on the market but they are developed to cater to specific needs in the 3D printing industry, needs that colorFabb can rapidly adapt and respond to through its streamlined structure, which covers the entire production cycle. “Ruud’s expertise allows us to reduce development times which means we can bring more tailor made materials to the market.” ColorFabb’s normal colour line in PLA, for example, also includes PHA to make it tougher and less brittle.

One possibile setback to colorFabb’s future expansion may be the decision by large producers, such as MakerBot and 3D Systems, to close their platforms and make them compatible only with their own filament. Sander is not particularly concerned. “I understand their business models, which is similar to that implemented by 2D printer manufacturers, although form a customer point of view this may be a significant limitation to not be able to try the newest and most exotic materials right away.” In fact this might even turn out to be an advantage, since in the future 3D printer manufacturers may want to enter into more direct partnerships with colorFabb. At the next London 3D Printshow we may find out more about that: it looks like it’s going to be a hot fall season for 3D printing.

[Ed: And even sooner than that we’ll have some in-depth reviews of colorFabb’s materials coming from @RichRap3D. Stay tuned.]