One of the most hopeful prospects of 3D printing is the use of recycled waste as functional building material to promote sustainable manufacturing processes. There are countless examples of production methods currently used that create cast-away byproducts that could be repurposed for future projects. Marble EcoDesign is a multidisciplinary, temporary collective that has seen this potential in the Coreno Ausonio Marble District of Lazio, Italy.

Above, I have embedded a video made by the group that artistically portrays the massive industrial process of producing marble and its marble dust waste. The waste, which ends up as a sort of sludge, is, according to Marble EcoDesign, “complex and expensive to dispose of.”  At the same time, the waste from their local quarries is relatively pure, made entirely out of Calcium Carbonate. Analysing the dust, the collective found that the byproduct “has an average density of 2.7015 g/cm3”, with “particles ranging in size from a few tens of nanometers (nm) to 150 microns” and “no peaks attributable to different phases”.  This purity gave the collective reason to believe that they could transform it into material for 3D printing. 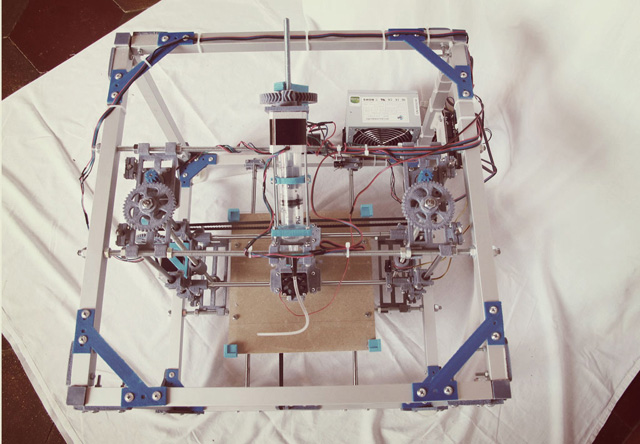 The collective – made up of an architect, a graphic designer, a writer and a user experience designer – has begun mixing this marble dust with a UV curable resin to form a filament.  With the help of a group called Design Lab Frosinone, Marble EcoDesign is using a Prusa-style 3D printer with very minute step resolutions (“as fine as ~0.5 μm”) and a steel nozzle capable of producing .16mm drops. Using a hybrid UV/FFF technique, the “resin-marble mixture being instantly ‘frozen’ under a beam of light,” which, according to the collective, increases the overall resolution of prints. 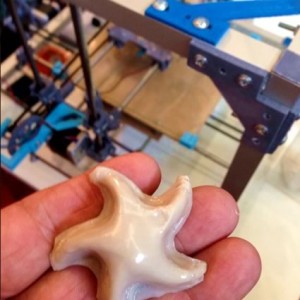 The group has already demonstrated some success with their designs. Above, you can see an object made via their hybrid printing process, as displayed at the MaikerFaire in Rome. Team leader, Michela Ruggiero, told Genitron (translated using Google Translate) that she sees this sort of solution integrated into all avenues of manufacturing:

I like to think we can get to the idea of a closed production cycle, in which every industrial district minimises the waste materials and the production of waste from landfill. This would mean that we are producing but without devastating our environment. I think this is the only possible future.

Dr. Joshua Pearce of Michigan Technological University termed this closed production cycle “industrial symbiosis” and it doesn’t seem out of the realm of possibility to me. For a generation that is becoming so interconnected and aware of the environmental destruction taking place around us, as well as the technological possibilities at our fingertips, I think that it only makes sense that we would fill in the gaps left by traditional manufacturing, and the previous generations. Not only could 3D printing fill the prototyping, customising and limited production line gap, but it can fill in the gap left by waste, as well.