Andre Tiemann, a 3D printing enthusiast from Toronto, was faced with a problem when asked to 3D print a university logo. He wanted to use three colours, but his MakerBot Replicator could only print two colours at once.

That problem led Andre to experiment with a layering technique that has produced some very attractive prints in 3D. He sliced and arranged the 3D model into layers using Netfabb Studio, then printed the files in sequence.

During the process, the existing print was never removed from the build platform. Instead, the platform was kept heated while Andre manually changed the colours of filament loaded into the extruder. After that, the next print in the sequence was started right on top of the previous one!

Andre was then inspired to create “2.5D” works of art for content on Instructables. After hand-tracing existing artwork using Sketchup, he extruded individual elements into different layers, then sliced them into separate files as he had done previously.

I love how they turned out! These are Andre’s interpretations of Andy Warhol’s banana (used on the Velvet Underground’s debut album) and Stuart Davis’ International Surface No. 1: 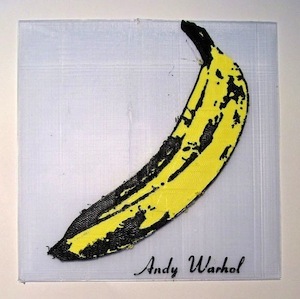 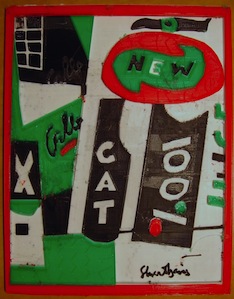 The banana model can be downloaded from Andre’s Thingiverse page, and the full set of 2.5D artwork can be seen on Instructables.