MakerBot and GrabCAD have excitedly announced the winners of their recent 3D Printer Challenge to design futuristic vehicles for the year 2040. The challenge resulted in 151 entries and six winners have been selected on the basis that they represent the most futuristic and beautifully designed cars, planes, spacecraft and other space-age vehicles envisaged to exist in the year 2040. All models are optimized for printing in 3D on a MakerBot Replicator 2 Desktop 3D Printer.

Makerbot’s CEO, Bre Pettis commented: “We were amazed and awed by the designs submitted for the MakerBot and GrabCAD 3D Print Challenge. Judging was incredibly difficult, especially since many, including myself, are major automotive enthusiasts.”

First Place was awarded to an entry entitled Alpha, created by Omega from Germany. Greek references aside, the judges were really quite taken with ‘this futuristic aerodynamic flying spacecraft [which] combines gorgeous curves with hot rod triple exhaust and spoilers.’ The sci-fi element behind this concept was startlingly apparent in the description supplied:

After solving the energy crisis with cold fusion in 2039, scientists made two very important breakthroughs in energy storage and propulsion. A new type of capacitor with an enormous energy density of 1MWh/dm^3 emerged out of a billon dollar project. Secondly, a highly advanced circular magnetoplasmadynamic thruster (cMPD) entered a practical stage. It works by accelerating hydrogen atoms very efficient almost to the speed of light. Through the relativistic mass dilatation, which occurs at such particle velocities, only a very small amount of working mass has to be carried along the vehicle. In 2040 the prototype Alpha, utilizing this technology, was built in cooperation with MakerBot Industries. The first flight beat all expectations. From then on it was an ease taking off vertically and flying out into space. Only a year later, the Alpha consumer product came to the market. Traffic was quickly heaved into the third dimension, and after two decades, massive autonomous cargo ships left earth heading towards Mars to initiate large-scale terrafomation.

…And so a new area for mankind began.”

As overall winner of the challenge, Omega will be awarded a MakerBot Replicator 2 Desktop 3D Printer. It’s so hard to resist the Star Trek urge right now … but I will!!!

The runner up in this challenge was Gaberiel Ortin who designed the 040 Direct Drive Vehicle. Gaberiel described his vehicle thus: This rugged automobile concept for the year 2040 is designed for individuals that can’t live without a fundamental driving experience. The concept features a rigid, lightweight construction and is entirely operated with by-wire technology. The electronic steering and propulsion systems allow for an intuitive, direct experience. The suspended seats rotate with the car when turning for enhanced visibility and the driver is directly connected to the road. 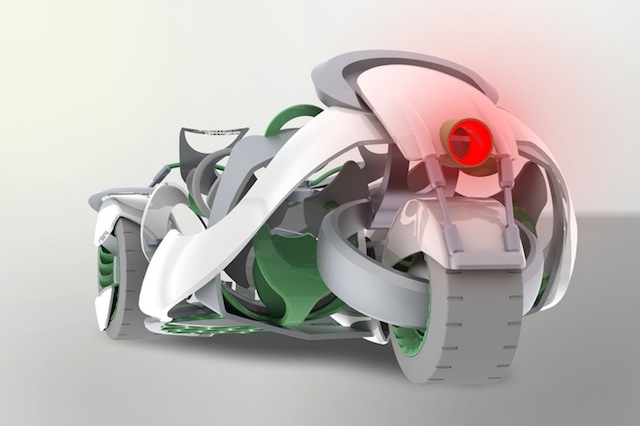 For his efforts Gabriel will receive a Makerbot Replicator 1 desktop 3D printer.

Third place went to Matthew Gueller who conceived his own Personal Hot Rod — A rather beautiful single passenger vehicle that is based around today’s hot rod motorcycles, but with a look toward the year 2040 as a rugged and stable vehicle to ride the ground. 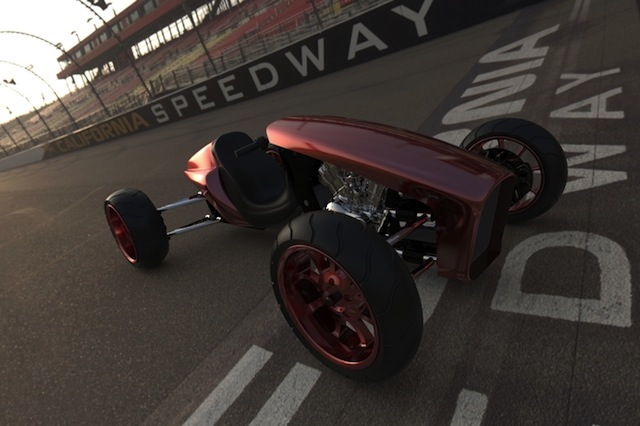