As Shane alluded to in a recent article, the Internet exploded this weekend when Makers and 3D printer users from all over became outraged by patents recently filed by Stratasys-owned MakerBot. The patents detail improvements to MakerBot systems currently in the works, such as a “force detector” that might be attached to a 3D printer extruder “to detect deflection forces and the like acting on the tool that might indicate an operating error.” So, what’s making the 3D printing community so mad? A lot of small 3D printer manufacturers and independent Makers feel as though these improvements were developed by the open source world first. If true, MakerBot-Stratasys would be patenting ideas that were not their own.

I first came across the controversy from a friend who relayed a post at OpenBeam USA. OpenBeam, maker of delta-style 3D printers, has been hard at work developing an automatic bed levelling process for some time. The OpenBeam Kossel Pro machine uses a probe attached to the extruder head similar to that described in the MakerBot patent. As OpenBeam’s Terrence Tam explains his anger regarding this latest news:

As someone who had been working with auto-levelling on the Kossel Pro, this was a very rude surprise. In a nutshell – Auto Levelling is The Next Big Thing for repraps. It is what makes the OpenBeam Kossel family so easy to use, and last year we became the first open source hardware company to ship an evaluation unit to Make Magazine for their 3D printer shootout.

Tam acknowledges that OpenBeam is only one among many that have been developing such a Z-axis probe. In fact, such a concept dates as far back as 2008, according to the RepRap forums. 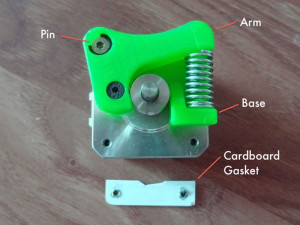 In addition to the force detector, whosawhatsis, from Deezmaker, called shenanigans on MakerBot’s filing for a patent related to a “quick-release extruder”. The patent application describes “[a] bearing that provides contact force to engage a filament with a drive gear has a movable axis that can be controllably moved toward and away from the drive gear in order to engage and disengage the filament.”

The quick-release extruder was previously added to the MakerBot Replicator 2, with some credit given to its designers, whosawhatsis and whpthomas. And, while this irked many, according to the Creative Commons license it was released under, manufacturers can sell these open designs, as long as proper attribution is given. The patent, however, is a different matter altogether, as reddit user (and moderator of the 3Dprinting subreddit) traversda explains on zir blog: “That means they can sue anyone who tries to use a similar design or method. Not just if they use that file, but any similar methods of feeding filament.”

As 3D printer users determine what to do about the situation, a few possible plans of action have arisen. One response, shouted about on Reddit (thanks, Scott!), has been to take .stl files down from Thingiverse altogether and replace them with images that say something along the lines of “Boycott MakerBot”. Reddit user matthewfive says, “Pull your files. They changed the site legalese a year or two ago claiming ownership of everything and then backtracked on that saying it’s normal and they’d never do something like they’re doing today. They’ve turned themselves into a hostile repository with this move.”

Another G+ user, Camerin hahn, thought that this would be counterproductive, saying, “Deleting your thingiverse account/Changing all of your models breaks the chain of proof required to prevent them from patenting your work in the future.” Instead, hahn urges others to keep their work on Thingiverse, but to redirect users to a different host as an act of rebellion. Since MakerBot originally changed their Thingiverse Terms of Service in 2013 in a way that reflected a less open attitude, users have been looking for new sites to host their 3D printable files. In fact, Repables is one model repository that was established for just such a reason.

Though boycotting MakerBot would be one way of calling attention to the cause of protecting open source designs, doing so may not achieve the legal ends that open source innovators desire. For that reason, OpenBeam’s Terrence Tam and others have suggested that innovators “file a 3rd party prior art submission to the USPTO with regards to pending patent applications.” Tam goes onto explain some useful tips for overcoming USPTO website glitches and ensuring a successful filing. Because these are only patent applications, there may still be a chance for the open source community to prevent MakerBot-Stratasys from claiming ownership of them.

As 3D printer manufacturers await, in fear, the outcome of the lawsuit filed by Stratasys against Afinia for use of fused filament fabrication, these recent patent applications only add salt to old wounds. What stings so much is that MakerBot, in particular, began as a symbol of the potential success of open source companies, but slowly grew more and more alienated from the community from which it sprang. In the eye of the open source community, MakerBot seems to be turning into the classic villain corrupted by the evil forces of a greedy master. I’m not a huge Star Wars buff, but, from what I remember and what Wikipedia tells me, here’s how things go for Darth Vader: “Once he becomes Darth Vader, each evil act he commits makes it harder for him to return to the light, but ultimately escapes the dark side and redeems himself before he dies by saving his son Luke Skywalker and killing Palpatine in Return of the Jedi.”

So, I guess what I need to know from the overlapping fans of 3D printing and Star Wars is: can MakerBot do a Vader redeem itself? Either way, I wanna live with the Ewoks. Then again, life is a bit more complicated than 70s sci-fi. For that reason, I asked one of the more complex / analytical people I know what he thought about the topic. In response, Shane gave some advice that may be more useful than my terrible Star Wars reference/analogy.

Two approaches to business and invention are meeting, the old guard of guarded ideas and competition and the new generation of open source and sharing. Some large companies may take advantage of this new approach in a less destructive way, while others may be a bit more exploitative of the open source model. Shane seems to know this as he says the following:

We are about to see the defining era of where ideas meet iteration and digital meets physical. In 3D printing code becomes art. A gap is bridged.

At one end of the range of ways of protecting ideas is a traditional patent. It is black and white.

Where a person is developing an open source 3D printable idea I believe that they should always express the desire to be attributed or make their work Creative Commons not for business use.

The onus is upon you to make a first notation publicly that this is your idea and you either have it patented, you want attribution, and / or it’s not for the use of others for business. If you don’t, and someone takes your idea to profit from it, you have already disclosed that idea publically.

Some companies will use open source platforms to observe innovation in progress and catalyse their own ideas, which they will then patent. Whether coding in a competition run by a company, painting at university, designing open source 3D printers, there is always prospectively someone looking at your work for ideas. Either elements of your work they can adapt to new ideas, or the whole thing.

3D printing uses some open source platforms. There is a new trend for crowd sourcing ideas in corporate culture. Put these two together and – theoretically – it’s not hard to see how open source platforms could be very easily abused by those seeking to monopolise markets or widen patent portfolios.

Big companies and individual open source enthusiasts can work well together. That part of how the world’s most valuable brand Google came into eminence.

But new home 3D printing enthusiasts need be urgently aware that although some 3D printing news sources talk of utopia, and some companies talk of free open platforms, the reality may be closer to that of Facebook: when a service is free, the product is you.

Keep your development work to yourself unless you cite the desire for open source attribution, not for business use, or register a patent. Or be cool with others profiting from your shared unprotected idea. But think about it all carefully first. You can’t change your mind afterwards.

All words and concepts (CC) Attribution not for business Ri Taylor 2014.

So make of all of this what you will, I guess. Thanks, Shane!

Title Source: As sourcing things is becoming increasingly important to avoid gettin’ in trouble, I’ll note that I heard the phrase Takerbot from our friend Nils, but don’t know who originally came up with it.