David Pierce, CEO of The 3D Box, believes in the commercial viability of 3D printing vending machines. Mr. Pierce is not just anyone. He’s the former CEO of Atari and Executive Vice President at Sony. Recently I looked at 3DLT’s move to create a partnership with PieceMaker, which uses an in-store 3D printing concept. The 3D printing vending machine is perhaps the ultimate on-demand 3D printing service. There are obstacles, mainly speed and material range, but once cracked, 3DP vending may feature in stores and malls across the world.

Virginia Tech’s Dream Vendor (as shown in the image below) hit news headlines just over 18 months ago as the first successful 3D printables vending machine. It’s not difficult to imagine how the ‘independent location manufacturing station’ trait of 3D printers – which has appeal for everything from space stations to ‘slums,’ moon bases to navy – can be converted into a vending machine concept. There are market considerations. What advantages would a 3D printing vending machine offer over in-store 3D printers? Or postal 3D printing services? Or simply 3D printing at home?

Clearly, whilst there is some future potential for many homes to have a 3D food printer in the kitchen and 3D product printer in the home office, these are concepts, that if they do come about, are going to take much more development. They are unlikely to be higher on most families shopping lists than ovens, fridges, freezers, microwaves, smart TV’s, smartphones, PC’s, tablets, wifi connections, cars and a number of other home electronics consumables. Necessity rules the wallet first, luxury second while novelty tends to come third, at best. Home 3D printers are likely to be novelties for the foreseeable future.

If this does indeed prove true, then what will consumer 3D printing be used for? Who will use it? And where will they get their 3D prints? There are numerous none-specialist appeals for 3D printers. The specialist appeals range from jewellery design students to architects, maker hobbyists to toy product designers, but for the rest of the population it’s mainly the odd repair part, personalised birthday present, unique houseware or flash of inspiration that will appeal where consumer 3D printing is right now.

For those needs, in-store 3D printing, such as UPS, ASDA and so forth have started offering, will be a possibility. If you can’t get to a supermarket or large store for your 3D print, or are looking for a greater range of colours, materials and expertise, online 3D printing services may be the next consideration. But what if you do not want to wait for your 3D print to be posted to you? It is for this section of the population: Who do not own a 3D printer (that’s almost everyone), live near a store offering 3D printing services (that’s currently almost everyone) and want cheap fast turnaround in a while-you-wait service (there’s the key variable to my mind – and where printing speed comes into play), that the 3DP vending machine may offer an ideal solution. 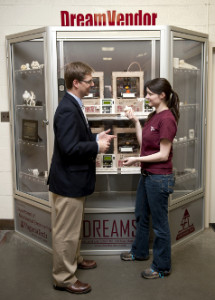 In conjunction with Showcase for Commerce, which began on Tuesday in Johnstown, U.S. Pierce has publicly announced his start-up.Individuals could load their own creations into the system or choose pre-designed items to print.

“It’s really an exciting product…. We just felt it was an appropriate time. Obviously, with Showcase, there is a lot of activity in the community,” said Pierce.

The 3D Box has received seed money from the Community Foundation for the Alleghenies’ Robert Waters Economic Development Fund and others. Mike Kane, the foundation’s president has said that the total seed amount is in the low six figures. Plans are still in the developmental stage. Production is expected to begin some time next year. Mr. Pierce currently believes that the company could employ twenty to twenty-five workers within three yearsin technology development, sales and marketing, and manufacturing.

This time next year the first notable year-on-year annual sales figures for the new large chain in-store 3D printing services will abound. Also the first sales figures from 3D vending machines will likely be available. It will be interesting to observe how these particular strata of business models for delivering 3D printing services emerge in relation to each other. There is, of course, no reason at all why a supermarket would not have a manned in-store 3D printing service alongside a 3D printables vending machine. I would speculate that it is likely that the size and materials involved in a 3D print may orientate which type of service a customer would use for a particular 3D print.

However things emerge, it is clear that some high profile names in technology are keen to enter this market. And Mr. Pierce is one of them.